In Grief, Media Figures On The Left And The Right Flail Impotently At Video Games
video

In Grief, Media Figures On The Left And The Right Flail Impotently At Video Games 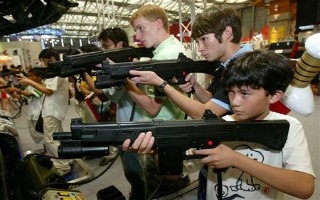 With the impact of the horrific attack on a Connecticut elementary school still fresh, a grieving nation turns to an equally grief-stricken media in the hopes of making sense of this nightmare. What they find, though, is a lamentable parade of falsehoods and half-truths. With the true villain in this story having robbed the nation of its desire for revenge, media figures and politicians alike are casting about for an antagonist. Since Sunday, a target has emerged in violent video games, and an emotional media is venting their powerless anger on the entertainment industry. But to indict entertainment, and video games in particular, is a self-serving instinct and irresponsible broadcasting.

A disturbing number of public figures have lashed out at video games since the atrocity committed at Sandy Hook Elementary on Friday. A bipartisan group of legislators embraced this scapegoating on the Sunday news programs; from Democrats like Sen. Joe Lieberman (I-CT) and Gov. John Hickenlooper (D-CO) to Rep. Jason Chaffetz (R-UT) and former Pennsylvania Gov. Tom Ridge.

They were joined by members of the media – sadly, too many to count.

On MSNBC on Monday, Chris Jansing asked her guests what connection Adam Lanza’s interest in video games had to his murderous shooting spree. She quoted senior White House advisor David Axelrod who tweeted “shouldn’t we also quit marketing murder as a game?” Liberal contributor Goldie Taylor revealed that she refused to let her child play games until he was 14-years-old.

“Exposure to that kind of content is just simply not good for children,” Taylor said. “I think that it’s important to guard our children and keep them safe from some of these messages that are simply destructive.” She noted that music, movies, games, and even cartoons, are responsible for… something.

“They are glamorizing guns in this country. They are the scourge in terms of these guns,” Johnson Jr. said of game and filmmakers. “Guns can kill if people have evil intentions, but don’t tell our children that it’s acceptable to mow down people in malls, in churches, in schools, on the street – they don’t know better. They know what they’re taught. And we’re teaching them wrong.”

“Death should not be the byproduct of our entertainment,” Johnson Jr. concluded.

Johnson Jr. cites a study which purports to show prolonged exposure to violent video games over the course of three straight days made the subjects show “increases in aggressive behavior and hostile expectations.” But Johnson Jr. is guilty of cherry-picking data to support his conclusion. A 2009 study showed that video games which focus on driving make the subjects more aggressive than violent games in where the player is primarily shooting at targets. Another study showed that just thinking about violent video games can make males more aggressive. Given the ever-expanding target demographic for games, gun violence should be on the rise. In fact, the opposite is occurring.

Violent crime, and gun crime in particular, has decreased as videogame playing has increased. Are the two conditions related – that is unlikely. Myriad factors are responsible for the decrease in violent crime; videogame proliferation is probably not among them. Likewise, there is no causal link between being a videogame player and exhibiting violent tendencies.

The Economist tackled this subject in 2005, and the wisdom they committed to print still pertains: It’s the classic struggle of the old versus the new that has video games in policymakers’ crosshairs:

“The opposition to gaming springs largely from the neophobia that has pitted the old against the entertainments of the young for centuries. Most gamers are under 40, and most critics are non-games-playing over-40s.”

The horror that unfolded in Connecticut on Friday was an unspeakable atrocity. It was not, as some have said, a tragedy. Tragedies are so often beyond control, but gun violence is not an inevitable consequence of living in a free society. Politicians feel the need to do something — anything — in the wake of such a disaster to assuage the inevitable public cries for action. Media figures, however, have a different responsibility. Theirs mission is not to advocate but to inform – unfortunately, that kind of responsible broadcasting is fast becoming an anachronism on cable news.

It is unlikely that any reasonable law would have prevented this attack without negatively impacting millions of law-abiding citizens. No amount of reverence for an almighty God would have made this killer think twice about his actions. No movie or videogame drove Lanza to murder 20 first graders in cold blood.

Broadcasters used to feel it was their mission to speak these cold truths to their audiences when disaster struck, lest the electorate reach for emotionally-driven and overreaching remedies to jarring events. Today, broadcasters pull on emotional triggers and further aggravate their viewers with baseless scapegoating. I do not know if there is an immediate solution to that condition. Now that is a tragedy.