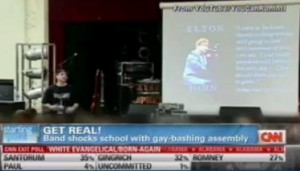 The upcoming documentary Bully, which is fighting for a more teen-friendly MPAA rating, tells the stories of bullied teenagers from Iowa, among other places. As if to illustrate the uphill battle kids face against not just the bullies, but indifferent or ineffectual schools, a school in Dunkerton, Iowa recently hired Junkyard Prophet, a Christian rock band whose ministry, You Can Run But You Cannot Hide, has been designated a hate group by the Southern Poverty Law Center, to host an anti-bullying assembly, with disturbing results.

The group is fronted by Bradlee Dean, the anti-gay lunatic who sued Rachel Maddow for $50 million because she made fun of his name (I’m not kidding), and called him out for praising radical Muslims who called for the executions of American gays. Dean disputes the characterization, but his full remarks are linked here, along with his later attempt to backtrack.

On Wednesday morning’s Starting Point, anchor Soledad O’Brien played a clip from the assembly, which she aptly described as “Welcome to crazy town,” in which the group introduces the topic of human-on-goat sex as it relates to the immorality of homosexuality.

It got crazier, if not necessarily “worse,” from there, as the group “divided the students up into girls and boys, told the girls that, quote, they’ll have mud on their wedding dresses if they’re not virgins before marriage,” and displayed photographs of aborted fetuses.

As if all of that wasn’t enough, local paper The Lacrosse Tribune reported that “Those who walked out or attempted to confront the speakers were shouted down or ridiculed as disrespectful, according to students.”

Nearly as infuriating as all of this bullying at an anti-bullying assembly was this kicker, from Soledad O’Brien: “The superintendent said he was very surprised. He said the other schools did not mention this.”

That’s right, apparently this group travels the countryside delivering anti-gay lectures to schools whose administrators either don’t have Google. or don’t care. In the case of the Dunkerton school superintendent, it sounds like the latter:

…”The kids were rocking out,” Stanton said.

He noted Junkyard Prophet performed at the school years ago prior to his tenure. According to Stanton, staff members at the school at that time and officials from other districts had positive impressions of the group.

However, Stanton said, the group apparently changed and misrepresented its total message going into Thursday’s appearance.

Another local paper, the WFC Courier, reports that the teacher who recommended the group will resign next week, but the Superintendent insists the timing is coincidental. ““This has been something that has been coming for a long time,” Stanton told the Courier. “He simply wants to be a superintendent.”

Lest you think that Bradlee Dean is some kind of fringe outsider, he was a longtime political booster of Minnesota Rep. Michele Bachmann, who helped him raise money for his ministry and was a guest on his TV show. They’re no longer allies, but not because Bachmann woke up and decided she didn’t want to be aligned with a hate group. It was Dean who dumped Bachmann in October with a crisp “Lady, you stink” on his radio show.

That’s what our kids are up against.