Joe Biden On Running For President In 2016: ‘I’ll Make Up My Mind On That Later’

Joe Biden On Running For President In 2016: ‘I’ll Make Up My Mind On That Later’ 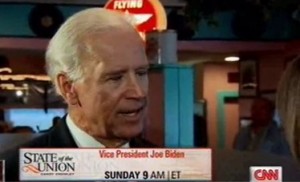 In an interview with CNN’s Candy Crowley on Thursday, Vice President Joe Biden refused to rule out a race for the White House in 2016, when he will turn 74. Crowley asked if he had ruled out a run in ’16, Biden replied, “I’ll make up my mind on that later.”

The clip, which aired this afternoon on Wolf Blitzer‘s The Situation Room, is sure to get attention for its optimism and Biden-iness, but there’s another part of this clip that could be even bigger.

Really, what’s Biden supposed to say, anyway? He’s a heartbeat away from the job now, and hopes to be for five more years. Telling Crowley “I’m in probably the best shape I’ve been in in my life” is pretty much what you’d expect him to say.

What might get some play from opponents of this administration, though, is what Biden calls his “one focus.” (from CNN’s The Situation Room)

“My one focus now is getting the President re-elected,” Biden told Crowley, then underscored it again, saying “Let’s get the president t re-elected.”

Now, from a neutral or liberal perspective, this makes perfect sense, since if President Obama isn’t reelected, Mitt Romney will ruin the country. To opponents, though, this is the kind of remark that they can seize upon as evidence that creating jobs isn’t Biden’s main focus. It’s also a neat little antidote to the oft-quoted Republican sentiment that their number one priority has always been to defeat the President.

The difference is, of course, that the President wants to beat the Republicans by growing the economy and creating jobs, whereas the Republicans want to break the President by voting against everything he supports, even things they have supported in the recent past. The trick is not to let electoral politics completely overtake governing politics.

Still, it’s a tasty little gafflet, and I’m surprised that Drudge missed it. Have at it, Newsbusters.