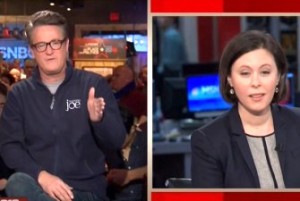 You really have to give credit where credit is due, and MSNBC’s Joe Scarborough deserves a lot of credit for the way he handled Wall Street Journal editorial board member Mary Kissel when she started bloviating about the Keystone XL pipeline Monday morning. In a Morning Joe segment pegged to Donald Trump‘s feud with the debate audience over eminent domain and being mean to Jeb Bush, Kissel pushed just a little bit too far in trying to distinguish between Trump’s use of eminent domain and uses like that of the now-stalled Keystone pipeline, and Scarborough put her down hard.

Kissel was trying to make the distinction between public and private uses of eminent domain, and made the mistake of trying to conflate roads and bridges with a privately-owned oil pipeline, then tried to throw up a bunch of other garbage about Keystone.

Setting aside Scarborough’s contention that the pipeline’s 50 jobs would be great for the U.S. economy, his responses were spot-on, and when he could have left it alone to allow Kissel to save face, he went in for the kill instead:

Scarborough: Mary, the point is the people putting the Keystone pipeline in aren’t doing it for the betterment of America, they’re doing it for the betterment of their bottom line. It’s the same thing: there’s a different between paving highways for public use and the Keystone pipeline, which an oil company is putting pipe down so they can make money and have their stock go up.

Kissel: There’s a distinct difference between a pipeline that gets us off of reliance of OPEC and Venezuela, rogue nations like Venezuela, and a parking lot for a casino in New Jersey. I don’t think you’re comparing apples to apples there.

Scarborough: First of all, you know the Keystone pipeline won’t make us independent from foreign oil, and secondly, you are allowed to go back and work at the Wall Street Journal editorial board because I do not pick up you saying anything positive about Donald Trump, so you’re clean, completely clean going back there.

Like it or not, Scarborough is absolutely right, there is no difference between the pipeline and Trump’s parking lot, except that Trump’s parking lot might have actually created more than the 50 jobs Keystone promised. The rationale is exactly the same, that even though these are private uses of eminent domain, the economic activity they generate will accrue sufficuent public good to make them worthwhile, kind of like the rationale they always use to sell taxpayers on paying for new stadiums.

I don’t agree with Joe Scarborough often, but this time, he earns the slowest of slow claps.