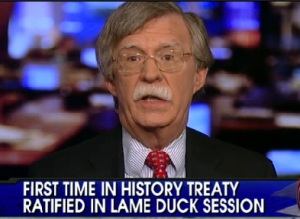 Former U.S. Ambassador to the UN John Bolton appeared with Tucker Carlson last night on Hannity to discuss his strong disapproval of the Strategic Arms Reduction Treaty (START). Bolton believed the ripple effects of the treaty would cost America “for years to come” and Tucker even described alleged liberal rationale for the treaty as “grotesque.”

The START treaty, if ultimately ratified by the Russian parliament, would require the drawing down of nuclear warheads of both the U.S. and Russia over the next seven years from current levels of 2,200 each to 1,550. Tucker was first annoyed that Obama rushed the treaty through the lame duck Senate, when in fact the hurry was unnecessary since Russia will not vote on it until the end of January. Bolted explained it was politically vital for Obama because the new batch of Republicans arriving in January never would have approved it.

More significantly, Tucker was confused by the basic theory behind the treaty:

Carlson: Why does it make the world a safer place when the U.S. gets rid of its own nuclear weapons? Isn’t a strong, well-armed America the key to harmony in this world?

Bolton: Of course it is, but not in the ideology of the Obama administration. They really believe that it’s America’s nuclear capability that’s the problem, not the source of strategic stability.

Bolton added a few more reasons for his displeasure, including Obama’s naive notion that if we reduce our nuclear arsenal then maybe other countries will too, the faulty cold-war mentality of focusing on Russia rather than real potential threats in North Korea, Iran and elsewhere, the belief that pulling back from our nuclear capabilities hurts the U.S., and Bolton’s assertion that the “administration doesn’t fundamentally believe in national missile defense.”

Their argument is we have to be vulnerable to a Russian first strike, and if we have missile defense, it would frustrate the Russian’s ability to destroy us. This is what mutual assured destruction is based on.

Although this conversation was interesting to see the conservative worst-case scenario critique of nuclear disarmament, if a liberal viewpoint was included, the conversation certainly would have been more enlightening. Supporters of START would argue it’s not the dismantling of national security Bolton seems to suggest nor a focus on Russia. Instead, they would claim the treaty was necessary in order to preserve the inspection process and to keep rogue terrorists, the real threat, from getting their hands on any loose nuclear weapons from an otherwise large and growing Russian supply. Consider that an effort to help make the debate “fair and balanced” and now “you decide.”