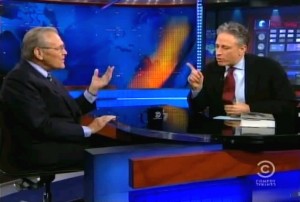 Former Secretary of Defense Donald Rumsfeld is on a major league publicity tour promoting his new memoir Known And Unknown, affording the so-called architect of the Iraq war the opportunity to frame his own historic record. While the arenas from which he’s been pitching his book have ranged from softball to hardball (so to speak), his harshest critics were likely most excited about tonight’s Daily Show appearance sitting across host Jon Stewart, who swung mightily at the conservative hero, but failed to land a knockout.

A cordial Stewart was overwhelmingly considerate in welcoming an individual so controversial that in some circles he’s been labeled an American hero for fomenting Democracy in the Middle East, and other circles vehemently believe that he should be charged with war crimes. After exchanging basic courtesies and plugging his book, Stewart dove right in by telling Rumsfeld “There was no momentum for a war in Iraq,” adding “so the WhIte House and the Defense Department and the State Department had to coordinate a pretty extraordinary effort to gather information and convince America that this was in our best interest to do so.” Stewart began to allege that Rumsfeld was part of effort that it took “to sell it to us” before being interrupted by Rumsfeld who corrected Stewart on the terms of debate. And that was how the discussion sort of went until the end credits rolled.

Stewart seemed geared up for a big debate, eager to phrase his recriminations of the former Secretary just right, but that the actual conversation focused more on the terms of the conversation in stead of the actual allegations that Stewart kept trying to get at. The Daily Show host was able score some valid points towards Rumsfeld, particularly when he said that “It seemed like the effort by the administration was more geared on making the case on why we invaded Iraq.” But Rumsfeld seemed jovial remarkably unfazed by the entire procedure, a stark contrast to the evil bogeyman blowhard as he’s been portrayed on the left.

The interview was cut for television, and we can only hope that the entire segment made available online tomorrow will reveal more tension and interesting bon mots. Until then, watch the video below, courtesy of Comedy Central.