Jon Stewart Explains The Purpose Of The Rally To Restore Sanity 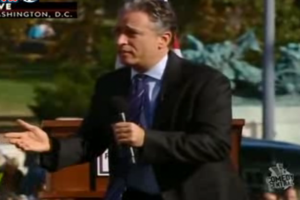 For a few seconds there, it seemed even Jon Stewart wasn’t quite sure what the nature of his beast, the Rally to Restore Sanity and/or Fear, was. “What exactly was this?” he asked the crowd. In an earnest speech pleading for unity and civility and even tipping his hat to Juan Williams and Rick Sanchez, Stewart explained that the rally was about bringing Americans together for the better of the country– and at the expense of shouty pundits on both sides.

“If we amplify everything, we hear nothing,” Stewart told the crowd, taking on both pundits on the left and right, and bringing up specific prejudices, fears, and hopes that have been overly dramatized, according to him, and as such diluted and stripped of meaning. He complained that those who use extreme labels on moderates of the other side not only offend those moderates, but the extremists that have “worked so hard” to earn those titles. And as for the true meaning of the day, he most succinctly explained in his introduction:

“I can’t control what people think this was. I can only tell you my intentions. This was not a rally to ridicule people of faith, or people of activism, or to look down our noses at the Heartland, or passionate argument, or to suggest that times are not difficult and that we have nothing to fear– they are, and we do. But we live now in hard times, not end times. And we can have animus and not be enemies. But, unfortunately, one of our tools in delineating the two broke. The country’s 24-hour politico-pundit-perpetual-panic-conflictinator did not cause our problems, but its existence makes solving them that much harder.”

His words rung sincere, and certainly struck a chord with some on the left (Keith Olbermann‘s Twitter feed, for one, is NOT happy with Stewart right about now):

Contrary to much speculation on the right, he kept his critiques balanced. He addressed Americans of all stripes, specifically noted that his intention to heckle those with which he has openly disagreed– in fact, his only intention was to dissuade those with the power of mass communication from doing so, constantly, on a daily basis. Those who paid attention to Glenn Beck‘s speech at “Restoring Honor” will be hard-pressed to find much of a difference at the core of both their speeches, that core being that Americans are truly good and care for one another, and that the only way to get through these difficult times is working together. Beck often describing himself as a bit of a Jon Stewart figure, the fact that it is now Stewart mirroring Beck’s message without much of the excess baggage that being Beck entails seems appropriate.

Unlike Beck, however, there is an immutable truth about Stewart that, while not strong enough to make his words hollow, lend no weight to his message: if those shouting heads on cable news stop shouting, and Americans start working together for the greater good of the nation, Stewart (and Colbert) would be out of a job in a heartbeat. Stewart was right to anticipate that, as a “comedian-pundit-talker-guy,” there are boundaries to what he can say without sounding at some fundamental level hypocritical. The challenge for those Americans who listened to Stewart is to let the words do the talking– that “we know instictively as a people that… we have to work together,” that there will always be darkness, as there will always be New Jersey, but it doesn’t have to define our lives– without letting the impulse to evaluate Stewart ad hominem dilute his message.