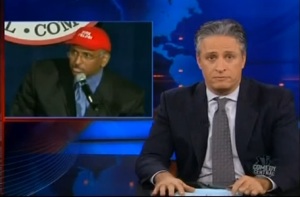 Just two days after hosting the “Rally to Restore Sanity,” a seemingly tired Jon Stewart returned to hosting The Daily Show, and recapped some of the more absurd political stories in advance of today’s midterm elections. The segment culminated in the outrage expressed by some over Barack Obama‘s “driving the economy car into a ditch” metaphor that led some pundits (almost all on Fox News) to hear racial overtones to the president’s comment of “the GOP can sit in back.”

Mr. Stewart summed up the current political climate based on the report that former president Bill Clinton allegedly tried to convince Florida Senate candidate Kendrick Meeks to drop out of the race to help Charlie Crist defeat Marco Rubio: “Ah, rather than vote for the guy who would agree for them on most things they’ll settle for the guy who has never really agreed on anything to keep out the guy who won’t talk to them.”

But the highlight of the following segment came as Stewart used various Fox News personalities alleging that the President was using a racially charged metaphor when he spoke of the GOP sitting in back; with a few pundits oddly adding “of the bus” to original comment. After airing a clip of Fox News’ Martha MacCallum saying “you are hearing more and more people mentioning that that was the connection they made,” Stewart summed up “unless you change the channel, and then you are hearing no one mentioning that,” adding, “oh, my god it’s a Fox News exclusive.”

Stewart went for the comedy kill, “Point is Obama is a racist,” continuing “at least week all agree how offensive it would be for any major political figure to invoke the ugly history of segment for an election in 2010 in the Fall.” Cue Michael Steele comment and pursuant laughter.