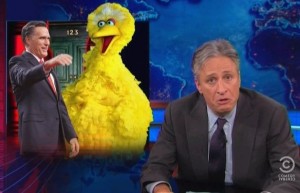 On Monday night, Jon Stewart took on the presidential debate. In particular, the Big Bird Debacle of 2012. “Who fires Big Bird?” Stewart asked. Then proceeding to mock the reasoning behind the conservative outrage over federal funding for PBS.

Not a huge line in the budget, but it’s about principle! Cue Lou Dobbs‘ criticizing President Obama for wanting to cut $4 billion in tax breaks for Big Oil. That’s only 0.0008 percent of the $5 trillion Obama’s added to the deficit, Dobbs exclaimed.

Thus, by conservative logic, Stewart pondered, eight million is greater than four billion? And why do conservatives feel so strongly anyway? The answer lies in many angry comments that include “propaganda” and “brainwashing.”

So Fox News is “upset that empty-headed puppets are trying to brainwash and indoctrinate Americans?”

“Perhaps you could sue them,” Stewart quipped. “The charge could be copyright infringement.”

Stewart then turned to John Oliver and Wyatt Cenac at This Week with George Snuffleupagus, who informed us how to make Sesame Street more “palatable.”

First, a name change: Patriot Street. Second, sponsors: brought to you by “viewers like you?” No. Embrace free enterprise. Along with a slew of other recommendations, there was of course discouraging the culture of dependency. Sharing is caring? Not that simple.

Harsh realities. The way to go.