Jon Stewart To Bill O’Reilly: ‘There Is A Selective Outrage Machine Here At Fox’ 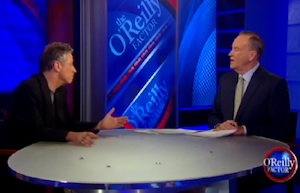 Daily Show host Jon Stewart appeared on Fox News’ The O’Reilly Factor tonight to debate the merits and career of rapper Common with host Bill O’Reilly. Stewart had been invited on the show last week after he had delivered what some had described as a pretty epic take down of the alleged controversy surrounding the performance by the Chicago-based rapper at the White House last week.

In O’Reilly’s eyes it seemed that the issue was a simple one: the President (or in this case First Lady Michelle Obama) should never have invited the controversial rapper to perform at the White House, because as he sees it, Common celebrates a convicted cop killer. As Stewart sees it though, the only reason that Common is considered a “controversial” rapper is because Fox News trumped up that narrative and repeated it on its opinion shows repeatedly (which happen to draw the most viewers on cable news by far.)

While being careful not to speak for the rapper, Stewart redefined Common as someone that wasn’t celebrating the killing of a cop, but rather “honoring someone he thinks was wrongly convicted of cop killing,” adding “I think he believes that she was convicted unjustly.” O’Reilly parried back, claiming that, either way the “president validated him by inviting to the White House,” adding that the invitation “elevates him as a poet or whatever.”

It was at this point that Stewart “flipped the script” by introducing Leonard Peltier the Native American activist who was also convicted for killing two members of the FBI, an individual who was the subject of a song penned by Bono. (You may recall that Bono has been invited to the White House numerous times by a number of administrations.) Stewart then included Bob Dylan and Bruce Springsteen as artists who have also written songs about people who have killed cops, pleading with the Fox News host that there is a remarkably inconsistent standard at play, or as Stewart put it “there is a selective outrage machine here at Fox.” Shortly afterwards, O’Reilly producers cut to commercial (let’s call it a standing eight count.)

After the break, Stewart continued to frame the debate in what he saw as the “fake controversy” surrounding Common’s White House appearance by challenging O’Reilly to agree to promote the reinstatement of the ban on assault weapons. “Because that doesn’t celebrate killing cops metaphorically, or figuratively,” an impassioned Stewart averred, adding “It tries to get weapons that kills cops, literally, off the streets.” O’Reilly has been a supporter of the ban on assault weapons.

A few other choice tidbits from the interview: The two cable news hosts also taped a segment on the coming presidential election that will air tomorrow night. Perhaps most importantly, the segment revealed that Bill O’Reilly is a big fan of The Weather Girls (singer’s of It’s Raining Men) is one of O’Reillys favorite bands. Who knew?

Watch the very entertaining segment below, courtesy of Fox News: