Jonah Goldberg Demystifies ‘Liberal Clichés’: Phrase ‘On The Right Side Of History’ Has ‘Marxist Sting To It’ 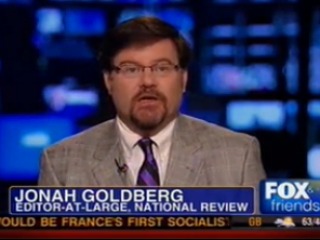 The National Review‘s Jonah Goldberg, author of A Tyranny of Clichés: How Liberals Cheat in the War of Ideas, appeared on Fox & Friends early Friday morning to discuss some common phrases — or clichés — used by the left.

But sometimes, he continued, “diversity isn’t strength. If we force the PGA to include one-armed, one-legged golfers, it would not be a stronger sport. And what the left really means by diversity is it’s a new theory to replace affirmative action to empower social planners, college administrators and bureaucrats to be able to pick and choose winners and losers and pick and choose favored groups, ethnicities, races and all the rest permanently and that’s the problem with it. It’s a way to push a radical agenda while offering sort of nicy-nice platitudes.”

Next up? “We’re only as free as the least free among us.”

You know, Steve, the toilet in my house has a blown gasket and it’s making this weird “chackota-chackota” sound. Since my problems are everybody’s problems, do you mind coming over and fixing it for me? […] I mean, this is the problem. It’s a way of pushing — like social justice and all the rest — it’s a way of pushing a doctrine of social solidarity that says is the government’s business to fix everybody’s problems. We just saw this website yesterday from the Obama campaign chronicling the life of this fictional, you know, cartoon character named Julia and basically the whole theory is the state is involved in her life from cradle to grave and all of her problems are the government’s problems. It’s a way to rationalize a very ideological view.

He refers, of course, to the Obama campaign’s recently-released “Life of Julia” ad.

Goldberg then explained that there “is a certain Marxist sting” to the cliché of being “on the right side of history.” It’s a way, he continued, of “saying to your opponents, ‘hey, look, you’re going to lose this argument eventually so you might as well quit now and stop complaining.'”