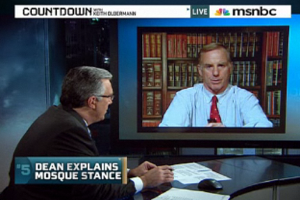 The debate over the Islamic community center in lower Manhattan as not just caused a rift in the local community affected by it. By making a national impact, it has put traditional political allies like Keith Olbermann and former DNC chair Howard Dean on opposite sides of the debate. Tonight, Olbermann and Dean met on Countdown, and the discussion felt like watching two old friends talk out an uncomfortable disagreement over lunch.

Dean made a splash in some progressive circles for coming out against the construction of the community center recently, a move that Olbermann respectfully shot down on his Twitter feed. While many (including Bill O’Reilly during the time the Dean/Olbermann discussion aired) were heralding the disagreement as a “civil war” on the left, it appears that Olbermann and Dean both intended to display the disagreement not as a war, but as an ongoing, enriching discussion.

Dean played the more moderate role to Olbermann’s more traditional left role (which culminated towards the end with Olbermann asking “How do you compromise with people who are absolutely irrational?”). Dean argued that, while he did not condone any sort of dialogue with “the Sarah Palins and Newt Gingriches of the world,” there were “legitimate” people, such as the families of 9/11 victims, who may feel uncomfortable and deserve to be listened to. Olbermann countered that, throughout history, Americans have needed an extra push towards tolerance, citing the civil rights struggles and various instances during which Americans were denied rights because of their religion. On that point, Dean was at his sternest, telling Olbermann that he found that “to compare the civil rights issue to the location of a building is inappropriate.”

Granting that there is a discussion, Olbermann wondered who the discussion would include, as he found most of the people involved in the issue– especially on the national scale– to be completely irrational. “You don’t have the discussion with the demagogues,” Dean argued, but with “the people in the city that have a genuine interest in this.”

It’s a long and intricate video, and while it takes a certain level of dedication to get through the whole thing based on the nuances and– as it’s a civil debate– lack of shameless cable news-type entertainment value, it’s precisely the kind of in-depth talk that cable news detractors are constantly pining for, and for good reason. Now if only these types of discussions could happen between people on both sides of the spectrum– haha, who am I kidding? That’s never going to happen.

The whole discussion via MSNBC below: