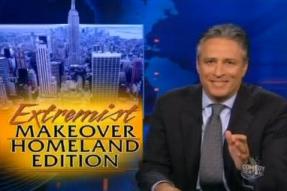 It has been a week of Islam community center near Ground Zero (ok, or ‘Ground Zero Mosque’) controversy segments on The Daily Show, and last night provided the finale.

Jon Stewart‘s massive nine-minute segment started with ceding some ground to its critics, and ended with him connecting some dots to prove a point. Fox News is a “terrorist command center”?

Interestingly, Stewart unearthed a clip to start the segment of Laura Ingraham essentially endorsing the project on Fox News back in December, before the politicization really heated up. Then he used Fox Business anchor Eric Bolling‘s recent appearance on Fox & Friends to make two points. First, as Bolling talked about the emotion behind 9/11, Stewart said:

In “a dangerous game of guilt by association you could play with almost anybody,” Bolling laid out how the Imam behind the Mosque may possibly be raising money or potentially supporting issues that could loosely be tied to terrorism. So with that in mind, Stewart laid out how News Corp.’s and Rupert Murdoch‘s Saudi connections could make the same point. “Is Fox News a terrorist command center?” asked Stewart, rhetorically. “I don’t know! I’m just saying you could draw this up.”

Will we make it to another week of this story, and by extension, more Daily Show segments about the issue? I’d say it doesn’t take a card and some highlighters to see that answer is ‘yes.’ Here’s the segment – which ends with Charlton Heston as the voice of reason somehow: