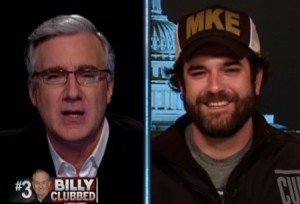 On last night’s edition of A News Tribute To Sinead O’Connor Videos, also known as Countdown with Keith Olbermann, host Keith Olbermann interviewed Branden Lane, the Wisconsin “Occupy” activist who ambushed Fox News personality Bill O’Reilly on his way to the White House, and got a face-full of O’Reilly umbrella for his trouble. Lane described his altercation with O’Reilly, while Olbermann pointed out the differences between O’Reilly’s account of the incident and the videotaped evidence.

While setting up the interview, Olbermann played some of Lane’s video, and O’Reilly’s fact-challenged response, pausing to relish a wind-assisted freeze-frame of the Factor host’s undone combover. Very mature.

Olbermann asked if O’Reilly had knocked him over. “I didn’t get knocked to the ground,” Lane replied. “When he attacked me with the umbrella, he did knock me off the sidewalk, onto the street.”

The host then pointed out the fact that O’Reilly is, in fact, famous for dishing out just this type of ambush, and asked Lane if he was surprised by O’Reilly’s reaction. “I was shocked,” Lane said, adding, “You would think that someone that’s in the public spotlight, just like you are, would not react that way.”

Lane also said he never thought about pressing charges against Bill O’Reilly, saying that it would distract from his real message. “There are many people around this country who are unemployed, who are underemployed, and they are ready to fight back.”

RELATED: Bill O’Reilly Reacts To D.C. Video Ambush: ‘I Felt The Guy Was Out Of Control’

Branden Lane seems to be a nice enough guy (even if he does keep saying um-brella, instead of um-brell-a), and overall, I think he and Olbermann have the right take on this. They’re both a bit too dismissive of the kind of anxiety that an approaching, camera-wielding stranger in the dark can evoke, but O’Reilly shouldn’t have hit the guy with his umbrella.

I’ve been ambushed like this before, though, and while I didn’t hit the guy, I understand the impulse. O’Reilly could have been forgiven that lapse (given that Lane thankfully wasn’t injured) if he had just said, afterwards, “Look, I got a little pissed off and shoved the guy with my umbrella. Maybe I shouldn’t have done that, but hey, I’m human. The guy was freaking me out.”

Instead, though, he changes key details in the story that are obviously false, most glaringly the notion that he “shielded” himself with the umbrella. That’s obviously false, underscored by O’Reilly’s sarcastic “Sorry about that!” once Lane righted himself.

If O’Reilly wants to act like a toughguy when someone he disagrees with approaches him (and again, I understand that impulse), he ought to display the same toughness in owning his actions.

Lane did offer O’Reilly a chance to atone for his attack. By way of apology, Lane said, he would accept an official “The Spin Stops Here” golf umbrella. Your move, Billo.

Here’s the clip, from Current TV’s Countdown with Keith Olbermann: