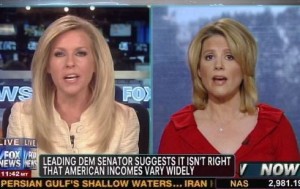 Fox News Channel’s Megyn Kelly moderated a heated debate on Wednesday between Monica Crowley and Kirsten Powers as the pair argued over whether it was right that hedge fund managers make more money than active duty Navy SEALs.

Crowley was asked to weigh in on Sen. Dick Durbin’s (D-IL) recent assertion that it is immoral for hedge fund managers to make more than Navy SEALs. Crowley replied that the Democratic party today has broken with the American tradition which values “equality of opportunity, not equality of outcomes.”

Powers argued that even Democrats like John F. Kennedy, who lowered marginal tax rates in his term in the White House, would join modern Democrats in their efforts to reduce today’s income inequality.

Crowley replied that if the Clinton-era tax rates were acceptable, so were Clinton-era spending rates and America should return to those as well.

When Kelly played a famous sound bite of President Barack Obama telling a crowd of supporters that he thought “at a certain point, you’ve made enough money,” Powers agreed.

“How much money does a person need,” Powers asked. “As a country, we need to be concerned about how we value people, and we’re not valuing the Navy SEALs the way they need to be valued.” Powers questioned whether corporate CEOs deserve the level of “value” that they receive.

“This is what America has always been about; it’s about risk and reward,” Crowley said.

“So, the Navy SEALs aren’t taking big risks, Monica,” Powers interjected. “Listen to what you are saying.”

“I’m not talking about the military, per se,” Crowley replied.

Powers insisted that Crowley was saying that risking one’s life in the military is not as valuable as investing money in a hedge fund. “That is not what I’m saying, and don’t put words in my mouth,” Crowley fired back.

“Nobody wants to take away equality,” Powers concluded. “I’m sorry, there are people taking much greater risks with their lives than a hedge fund manager.