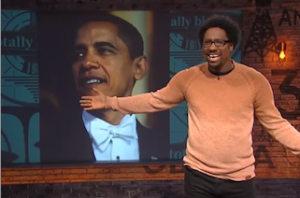 It’s been hard to find too many people willing to genuinely defend the IRS’ decision to actively target tea party groups for audits, but last night on his cable late night show Totally Biased, W. Kamau Bell did just that. After letting George Stephanopoulos read the news, Bell started slow-clapping, then shouted, “That’s what I’m talking about! That’s the black president I ordered, you know what I’m saying? That’s the black president we wanted, right?”

While it’s not clear that Bell was being completely sincere in his praise, he did appear to take some joy in the misfortune of the tea party. “This is what presidents do,” Bell explained. “They use the IRS to stick it to their enemies, that’s what I like.” He added, “I don’t get why everybody’s acting like this is some, big, crazy scandal,” saying the same is true for Benghazi and the AP phone records seizure. After outlining the overblown plot to the ABC TV drama, Scandal, he said, “that’s a scandal!”

Bell concluded, “Barack is finally using the presidency for what it’s supposed to be used for: petty vindictiveness.” He then showed the audience a copy of his Obama-centric tax return and said, “That’s why I go to H&R Black.”

While a liberal late night host like Jon Stewart has used Obama’s scandals to show that he’s an equal opportunity satirist, hammering the president harder than ever, Bell has gone in quite the opposite direction. But the question remains, does he really believe what he’s saying, or is he pulling some sort of elaborate reverse-Stephen Colbert sarcasm maneuver?

Watch video below, via FX: