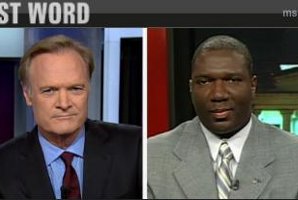 Surreal South Carolina Senate candidate Alvin Greene kept things pretty quiet for a while, but he broke that relative silence last night on The Last Word, where Lawrence O’Donnell brought him on for a Q&A. Like most everything involving Greene, things got pretty bonkers extremely quickly.

O’Donnell did manage to get a rambling, tortured, vague explanation of why Greene feels DeMint personally caused the recession, as well as an equally rambling explanation as to why Greene, unlike DeMint, thinks single mothers should be allowed to teach in public schools. But mostly, it took a backseat to Greene’s pet cause of the night, which was promoting the idea that Jim DeMint caused the recession. Greene said essentially the exact words “DeMint started the recession” or “DeMint is responsible for the recession” ten different times, and said similar things a couple times besides that.

This all makes it even more remarkable that O’Donnell concluded the interview by paying Greene an extremely backhanded compliment: “Alvin Greene = still better than Jim DeMint.” If that’s true, though, Greene didn’t give us much reason to believe it. Video of the interview below, and were still not 100% convinced Greene isn’t a performance artist. Assuming he’s not, it’s still hard not to feel a little bad for the guy.