Lawrence O’Donnell: Donald Trump Is A ‘Very Dangerous Man Who Must Be Stopped’ 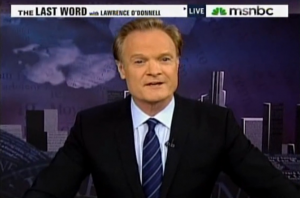 Calling Trump “America’s Vulgarian-in-Chief,” O’Donnell led viewers through Trump’s recent Today interview with Savannah Guthrie, his awkward chat with George Stephanopoulos, and his interview Michael Isikoff – discussing his stance on abortion, his doubts about Barack Obama‘s country of birth, and his business practices (not to mention the establishment of his genuinely perplexing “Trump University”), respectively. O’Donnell continued by calling Trump a “very silly man” who can barely string a sentence together, calling special attention to an instance of Trump using poor grammar.

He then asserts – exactly as he did the night before – that Trump will not end up running for President, and that NBC will tighten the reins on Trump just as soon as the network announces its programming for next season. Then, he warned his audience that Trump is downright dangerous:

In the meantime he will continue – knowingly or not – to fan the flames of hatred in this country, hatred of an imagined foreign-born president, a hatred that is born by many who simply hate that we have our first African-American president.

There is something very ugly in what Donald Trump is doing, and it is built on a base of racism and paranoia. I’m not saying Donald Trump is racist or paranoid; he doesn’t have to be to do the damage he is doing in this country. He just has to be vulgar enough to keep barking out the lies that the racist, paranoid Obama-haters want to hear. And in doing that for them, on major network television talk shows, it legitimizes their feelings, their hatreds, their racism…

The problem with O’Donnell’s assertions, as eloquently stated and impassioned as they may be, is that saying this – once, twice, 78.2 billion times – insults the intelligence of his viewers. Presumably, people tuning in to evening political opinion / news programs like The Last Word are extremely aware of everything Trump has been saying and don’t need O’Donnell to spell things out for them, interview by interview. And if this is man truly is so idiotic, so vulgar, so beneath the illustrious position of this nation’s Commander-in-Chief as O’Donnell believes, wouldn’t lending airtime to his beliefs and rants be akin to feeding a growing monster? Is mocking Trump’s grammar really conducive to showing us that this man poses a real threat to his country? Do we really need O’Donnell to make dismissive remarks about Trump when the man’s own fellow party members – people like Karl Rove, Bill O’Reilly and Mark Levin – have already done so, and done so much more succinctly?

O’Donnell agrees with this somewhat, but tells his viewers that – until NBC announces its next season’s lineup – it’s up to him to warn us all of the dangers he poses. As if this is not a tune we’ve heard time and time again – including on O’Donnell’s own show.

And then there’s the matter of the language O’Donnell chooses to describe Trump. Didn’t we all decide, rather recently, to hold hands, gather ’round a campfire and avoid using rhetoric like “he must be stopped”? If Trump truly even isn’t going to run, why must he be stopped? If he’s catering to one very specific group of Americans, what’s the great harm – wouldn’t this group remain just as frustrated (and, as O’Donnell claims, racist and paranoid) without Trump? Don’t they have many other politicians ready, willing and eager to echo Trump’s talking points? Does O’Donnell’s audience really need him – need him – to guide them through Trump’s interviews like this? (No.) Doesn’t the message lose its potency and urgency when it’s repeated over and over alongside an assertion like “well, this fool isn’t even going to run away, so…”? (Yes.)

Give us something new, please.

Watch O’Donnell’s segment, from MSNBC, and let us know what you think: