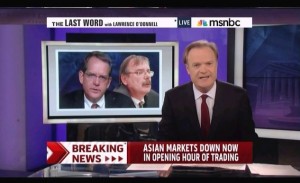 Tonight was the first chance for most cable news pundits to react to Standard & Poor’s decision to downgrade America’s credit to AA+, and as expected, most came out swinging. While the blame game roared between Democrats and Republicans, however, Lawrence O’Donnell went straight to the source, reminding his audience that S&P gave Lehman Brothers brilliant ratings until the day it collapsed, and reading instant message transcripts from employees there calling it “the stupidest place I’ve ever worked at.”

O’Donnell didn’t neglect to give House Speaker John Boehner some of the blame for the downgrade and subsequent economic disaster, but he didn’t dwell too long there, as he found most of the blame to lie with the heads of Standard & Poors– John Chambers and David Beers. He noted that United States bonds are still the safest monetary investment out there and called the downgrade a “purely political act taken by these two leaders of the confederacy of dunces [good book!] known as Standard & Poor’s.”

O’Donnell then aired a laundry list of grievances against them, beginning with the fact that S&P “had miscalculated our debt on Friday by $2 trillion” and going ahead with the downgrade “entirely in political terms.” The fear driving the downgrade, O’Donnell noted, was that the United States would at some point fail to raise the debt ceiling. “They actually think that within the foreseeable future, the next few years, the United States government may default on its debt simply by failing to raise the debt ceiling,” he explained, which in part made them “the most incompetent analyzers of debt in history.”

He argued that this was silly, as the resistance we saw this time around differed from the usual only in how loud the negotiation was, something that “the politically illiterate Chambers and Londoner Beers” didn’t understand. Another thing they didn’t understand? The Tea Party didn’t have an impact on politics, O’Donnell argued. “Michele Bachmann has never once mattered in American politics,” he argued, “nor will she in the future. You have to know something about politics to know that.” He then went on to call the heads of S&P “stupid” several times for their political analysis, and argued that their ignorance was “more dangerous” than “the craziest of the Tea Party.” “The are a disgrace to their occupation,” O’Donnell railed, “which does not deserve the more elevated term ‘profession.'”

To add insult to injury, O’Donnell then took a look back at some of S&P’s other greatest hits– like giving “the toxic waste of Wall Street,” Lehman Brothers, an A rating up until the month it collapsed, elevating it to the same level as American Treasury bonds. And it’s not just O’Donnell that thinks S&P is stupid– he even brought out old instant messages from S&P employees calling it “the stupidest place I’ve ever worked at.”