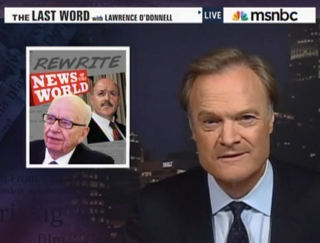 The comparisons between the Watergate scandal and the current fracas threatening to engulf Rupert Murdoch‘s News Corporation may as of yet be premature, but one thing does tie them together: the dizzying number of people that may be involved. While most of the coverage has hovered over the British wing of the operation, Lawrence O’Donnell took a peek tonight at the American potentially involved, and suggested the secrets of Murdoch’s American operation may lie with one dubious source: corrupt former New York City police chief Bernard Kerik.

During his “Rewrite” segment tonight, O’Donnell took a peek at some of the American friends that had stood up for Murdoch so far, beginning with former New York City mayor Rudy Giuliani. Citing an interview with Giuliani where he called Murdoch an “honest man,” O’Donnell suggested that Giuliani, despite being a former prosecutor, was not exactly “the most credible character witness,” in part because “the New York Republican relationship to Murdoch is as ugly as you’d imagine it to be.” He then took a bit of a detour in the segment to indulge his favorite pastime, popping the hope-against-hope of far-fetched Republican presidential candidates like so many soap bubbles floating up on a hot summer day. But after reminding Giuliani that his presidential dreams were “hopeless and ridiculous,” O’Donnell put his eye back on the ball and noted that the relationship between Giuliani’s police chief, Kerik, and Murdoch may be the key to unlocking the mysteries of the American wing of this story.

“Bernie Kerik was a tool of Rupert Murdoch,” O’Donnell argued, reminding viewers that he was Giuliani’s former chauffeur and “an utterly unqualified high school dropout.” He also noted that Kerik “was and is a criminal”– hence the jail sentence– and that his proximity to News Corp coupled with his captivity should be making Murdoch and company sweat as the scandal unravels. “There is no down tonight that Bernie Kerik is at the top of the list of people police will want to interview in the investigation,” he argued, and if they do get to him, “Kerik will crack and tell them everything he knows about Rupert Murdoch and his empire.”

There is a key flaw to O’Donnell’s argument: he doesn’t actually present any evidence that Kerik and Murdoch were close, or that Kerik and Murdoch had a corrupt relationship– he just sort of hopes you take his word that it’s a pretty ugly situation. That’s not to say that O’Donnell is not relaying information that may be true and that that corruption doesn’t exist, but he missed out on a key parallel between Kerik and former London Police Chief Sir Paul Stephenson, who stepped down this weekend amid the scandal. If Murdoch’s tentacles could extend that far up into the police chain in London, it is conceivable they could do the same in New York. Sure, Stephenson’s resignation is common knowledge, but excluding that context from O’Donnell’s argument makes the entire theory feel more makeshift and shoddy than it may otherwise be.