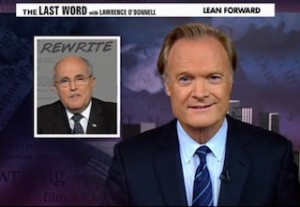 With the ten-year anniversary of the attack on 9/11 less than two weeks away, many in the media are looking back at those tragic events with renewed context and perspective. Last night, Lawrence O’Donnell joined the chorus of his fellow opiniotainers, though with a remarkably different take. In his “Re-write” segment, the MSNBC host took an incredibly harsh look at the myth of 9/11 sacred cow Rudy Giuliani, and deduced that some incompetent decisions made by the then-New York Mayor actually “cost lives.”

The basis of the criticism stems from Giuliani’s alleged insistence to put the crisis management center at Ground Zero, which was labeled as such before 9/11 because it had already been bombed by al-Qaeda. O’Donnell reports that Giuliani’s decision was “ego-driven,” and designed more for easy media access than for acting as a safer and less vulnerable command center.

The nut of O’Donnell’s critique (rough transcript provided by MSNBC):

Giuliani’s ego-driven decision based on his craving for media attention during any possible crisis meant that when they needed it most, on 9/11, the command center was useless because Rudy Giuliani had decided to locate it at ground zero. That Giuliani decision cost lives, which is why the international association of firefighters vehemently opposed his candidacy for the president in 2008. The firefighters association reports that 121 firefighters in the north tower didn’t get out on 9/11 because they didn’t hear evacuation orders. They didn’t hear those orders, because Rudy Giuliani learned absolutely nothing from the first deadly attack on the World Trade Center.

Firefighters’ radios failed to work back then when they responded to the bombing of the world trade center, and they failed to work again, years later, on 9/11. Even if the inadequate fire department radios worked on 9/11, they were not connectible in any way to the police department radios or police department communication of any kind, even though the city had obtained additional radio frequencies from the federal government in 1995, specifically to make that kind of communication possible. Mayor Giuliani’s failure to do anything about the primitive fire department radios meant that on 9/11 fire chiefs had no idea that police helicopters were predicting the collapse of both towers long before they fell.

Yes, there is hyperbole in O’Donnell’s commentary, but none less than the hyperbolic hagiography that Giuliani has enjoyed in the ten years that have transpired since the events of 9/11. Watch the damning clip below, courtesy of MSNBC: