Lindsay Lohan On Her Comeback: Not ‘Going To Let Anyone Down, Especially Myself’ 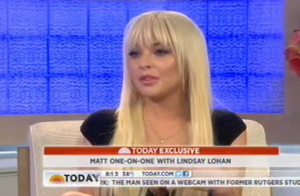 Ahead of hosting Saturday Night Live this weekend, Lindsay Lohan sat down with NBC’s Matt Lauer to chat about her career goals — and her comeback. Throughout the segment, Lohan emphasized how community service has helped her, and that she’s looking forward to new acting projects.

Lauer introduced her by saying, “At just 25 years old, she’s attempting a comeback,” and “she says she’s rid herself of people who were bad influences.” He then went on to mention her SNL gig (Lohan said she’s looking forward to poking fun at herself), her community service, and how she looks at her old self.

Asked about those who doubt her good patch with last, Lohan replied:

It’s unfortunate. but if I harped on that and only focused on the negative and people that doubted me, I might be right back where they wanted me. But that’s not for me and I’m not going, I don’t want to go back to that place. I want to move forward with my life, and I want to continue to move forward.

Five years from now, she said, she hopes she’ll just have come back from the Oscars. Speaking of which, Lohan is looking to immerse herself in her acting career — and will start by portraying Elizabeth Taylor in an upcoming film. “I’m not going to let anyone down,” she said, “especially myself.”

Toward the end of the segment, Lauer asked about her personal life, to which Lohan replied she’s not looking to be in a relationship. Her focus, she emphasized, is her career.