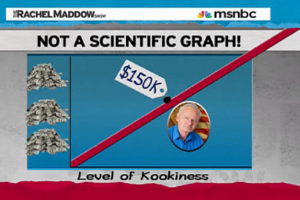 In a year that has made the Rachel Maddow Show must-see TV for campaign implosion enthusiasts, Rachel Maddow exhausted her quota of bizarre candidate interviews (we hope) earlier this week with Art Robinson, Republican candidate for Senate in Oregon. Yesterday she took some time to make sense of her experiences and highlight why she tussled with Robinson in the first place: he is being funded by a shady independent group uninhibited by current campaign finance laws.

Maddow initially appeared quite scarred from her “18-minute trip down the rabbit hole” with Robinson, who believes he has “personally disproven global warming” and that more nuclear testing in America is a good thing because “radiation is good for you.” He also wants to abolish publish schools, believes AIDS is a government plot and includes horribly racist children’s books in his home-school curriculum. But Maddow is not so overly concerned with how strange Robinson is; in fact, she is well-acquainted with the archetype:

“There was a guy like Art Robinson, I’m guessing, in your town somewhere. Maybe on the outskirts of town. Americans are like this! There are a lot of unusual people in this country and a lot of them who hold extreme beliefs and propound interesting theories. It is not even that weird for people like this to run for office. It’s one of the things folks like this like to do, in my experience, actually… What is really important is not how unusual he is as an American or as a candidate. What is important about Art Robinson is that he is potentially viable this year as a congressional candidate, not because of anything about him or about his life’s work, but because of this.”

“This” is an ad by “Concerned Taxpayers of America,” a group recently established with legally unlimited funding that has begun to put out ads in Robinson’s favor. The problem, she explained, is not that Robinson is “kooky,” but that with the right amount of money, people will vote for him: “the idea that a candidate is too kooky to be elected is only true in an environment in which there is not unlimited money to be spent to make that person seem less than kooky.” To prove her point, she debuted the above “kookiness graph,” of such precision it must have made Ezra Klein green with envy.

Her breakdown of the campaign finance mess through the eyes of Art Robinson, via MSNBC, below: