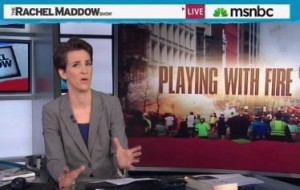 Rachel Maddow opened her show tonight taking on the conspiracy theories coming out of the woodwork to claim the Boston Marathon bombing was an inside job by the U.S. government designed to strip Americans of their liberties. Ordinarily fringe conspiracists wouldn’t be worth giving credence to, but Maddow noticed how the conspiracies and those pushing the conspiracies are being embraced by elements of conservative media, including one of the most influential sites on the internet. Maddow argued that influential conservative media now are just abandoning all pretense and “full-on embracing the conspiracy theorists.”

RELATED: Matt Drudge Tweets Kind Words For Alex Jones: ‘One Hell Of A Broadcast In Such Homogenized Media’

Maddow brought up the false flag, government destruction theories being pushed by InfoWars and its star figure, Alex Jones. You remember Alex Jones, the crazy guy who went ballistic on Piers Morgan? Well, he’s been out in full force again, but this time it’s coupled with an endorsement by none other than Matt Drudge.

Maddow pointed out that Drudge isn’t just some fringe guy, he’s in charge of perhaps the most influential conservative website on the internet. Maddow made it clear that Jones is just nuts, showing a clip of Jones touting a bizarre NASA conspiracy involving multitudes of dead astronauts. But the madness is not just limited to Jones, and Maddow showed off the ramblings of one Republican New Hampshire state representative who posted a link to Jones’ conspiracy on Glenn Beck‘s Facebook page. This is an elected official who thinks it’s worth asking if the government bombed Boston.

But if that wasn’t enough, four Republican congressmen wrote a letter to Homeland Security to request they investigate what basically amounts to another conspiracy theory. Maddow said conservatives have always had to deal with this sort of thing, but now it’s slowly seeping into more mainstream outlets. She said, “The American right, right now, is embracing this stuff way more overtly than they have in the past.”

“The right is taking the gloves off after the Boston bombing. The most influential conservative media online is full-on embracing the conspiracy theorists who say it was the government who attacked… These forces have always existed on the right. And they are now, though, as great as they’ve ever been. Where are the countervailing forces on the right, if there are any, and where does this all end?”