Maher Praises ‘Kooky’ Snowden: ‘At Least Now We Get To Have Debate About Our Security Trade-Offs’
VIDEO

Maher Praises ‘Kooky’ Snowden: ‘At Least Now We Get To Have Debate About Our Security Trade-Offs’ 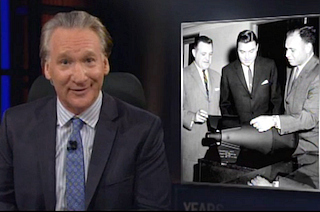 “If Ben Franklin writes something smart, but Sarah Palin tweets it twice and puts it on Facebook, that cancels it out,” Bill Maher said at the start of his New Rule segment Friday night.

“The quote of Ben Franklin’s I’m referring to isn’t very smart, even though it’s become kind of an unquestioned conventional wisdom,” Maher said, referring to Franklin’s famous quip that those who trade liberty for security deserve neither.

“Ben Franklin in his time could afford to be absolutist about not trading any liberty for safety, because in 1755 the worst weapon an enemy could bring against you was a cannon or a musket. Now we have undetectable deadly nerve gas and nukes. The Founders were brilliant, but they weren’t fortune tellers. When they wrote the Fourth Amendment, they couldn’t foresee e-mail, and when they wrote the Second Amendment they couldn’t foresee Ted Nugent.”

Maher invoked the suitcase nuke, originally an invention of the U.S. government, now capable of being made by enterprising terrorists around the globe.

“Do I want somebody snooping into their emails?” Maher asked. “Yes! Yes I do. But I also want there to be draconian penalties if they snoop for any other reason. Then I can live with my trade-off.”

“The good news is, there are at least ten bills in the House and Senate right now that would modify or outright repeal the Patriot Act,” Maher said. “We’re at least now having that debate about our security trade-offs. And for that, I gotta give credit to Mr. Ed Snowden.” (The audience didn’t seem to know whether they were supposed to applaud the leaker.) “He’s a little kooky, but before he showed up with his nerd glasses and stripper girlfriend, nobody was talking about the NSA. It was just another government agency nobody paid attention to—you know, like Congress.”