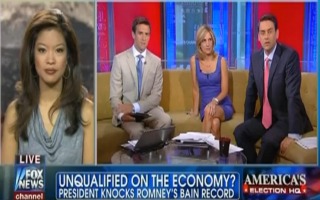 On Fox & Friends Weekend on Saturday, conservative columnist Michelle Malkin took on President Barack Obama’s campaign strategy of attacking Republican presidential nominee Mitt Romney for his record at the private equity firm Bain Capital. Malkin also took a swipe at Obama’s supporters, implying that they too do not understand how private equity works because they have not been employers themselves.

During an interview with CBS News’ Charlie Rose, President Obama explained that while he understands the role that private equity plays in the economy and that Romney had a responsibility as the manager of that firm to maximize returns for investors, “that doesn’t necessarily make you qualified to understand the economy as a whole.”

When asked to respond to those comments, Malkin began by expressing her shock.

“Let me begin by picking my jaw up off the floor,” said Makin. “I’m floored by the audacity of this man who has overseen near double-digit unemployment for most of his tenure challenging anybody else’s job creation record.”

Malkin said that Obama’s statement is a “glimpse into the mind of a command and control progressive.” She went on to say that it is “galling for someone like Barack Obama, with his record, to judge what a successful business is,” and Obama has displayed contempt for the mechanisms of capitalism.

Later in the interview, Malkin slammed President Obama’s supporters. “Romney types, of course, are the ones who sign the front of the paycheck, and the Obama types are the one who have spent their entire lives signing the back of them,” she said.

When asked about the Obama Administration’s recent action making the work requirement for welfare recipients more relaxed, Malkin said that the President’s action was illustrative of his affinity for government by fiat.