Megyn Kelly: Asking Marines To Disarm At Door Like Saying ‘We Don’t Trust You Not To Shoot Defense Secretary’
video

Megyn Kelly: Asking Marines To Disarm At Door Like Saying ‘We Don’t Trust You Not To Shoot Defense Secretary’ 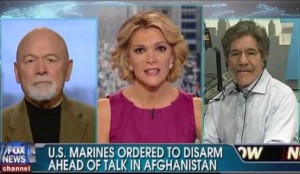 Feeling the after-effects of a U.S. soldier’s recent shooting rampage that resulted in the death of sixteen Afghan civilians, Marines were ordered to disarm before attending a speech by Secretary of Defense Leon Panetta. Fox News host Megyn Kelly said this requirement raised “troubling questions about whether our leaders trust our troops in the field” and invited Lieutenant colonel/retired Marine, Bill Cowan and colleague, Geraldo Rivera to discuss this matter on her show.

“Allegedly, their commanding general is the one that made that decision,” Lt. Col. Cowan said. “I’ve looked at his record, he has a lot of time in combat, a lot of time in Iraq, time in Afghanistan, he himself knows that our men and women walking around over there with their weapons do not just put them down somewhere, asking them to leave their weapons at the front door is like asking them to leave their right arm at the front door.”

Lt. Col. Cowan added that this displays a lack of trust in the U.S. military and that such a view is problematic. “I have to believe that the decision came from somewhere above this general, although he’ll stand by that decision…The real question is…who do we trust? If we can’t trust our Marines, who can we trust?”

Rivera said the larger picture, which “we’re dancing around,” is that there is “some real disillusionment with the mission now in light of the Koran burning and the staff sergeant’s massacre”:

“I think there are rumblings of some discontent and I’m not at all suggesting morale is down…but I think that there is enough rumbling, enough troubles, that they’re suggesting why, when you have a cabinet level official here…why even take a chance in light of these extraordinary and extremely depressing events?”

Lt. Col Cowan said leaving ammunition at the door could be an alternative, to which Kelly responded, “Both of you are assuming that there’s a reason to distrust the Marines, in the wake of what, one Marine? … That’s ONE!” The former Marine explained to Kelly that he believed there is a dramatic difference between asking military officials to part with their weapons at the door and having them remove the ammunition from the machines.

Playing it safe seems like the obvious solution to avoiding a second murder spree such as the one that took places several days ago, but Kelly said the actions of one individual do not represent the troops as a whole:

“That doesn’t mean you can’t trust Marines…If that’s really what’s going on, they don’t trust the Marines, that’s a big deal, Geraldo because the military is coming out and saying it wasn’t about that massacre, by that one guy, and it wasn’t even about the threat that…Panetta faced at the airport, when he landed in Afghanistan, they say it’s just because we wanted it to be an even deal. Afghans don’t have their weapons, neither do the Marines.”

“Are we piling it on by sending them the message, ‘we don’t even trust you anymore, we don’t trust you not to shoot the Defense Secretary’?”

One would hope they’d have more faith in the military than that.