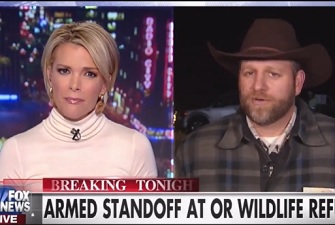 As day three of the armed takeover of a federal facility in Oregon comes to a close, ringleader and Cliven Bundy spawn Ammon Bundy may have met his match in Fox News host Megyn Kelly, who summed up the lack of amusement most of us are feeling for the group’s sense of persecution. Even Republican candidates who are paying lip service to the group’s “issues” are denouncing the takeover, albeit gently, while no less a journalism titan than Jake Tapper has taken to calling them an “armed anti-government gang.”

But in an interview on Monday night’s The Kelly File, Ammon Bundy could find no quarter for even a little bit of his nonsense. The interview consisted mainly of Ammon Bundy trying to draw Kelly into an argument about the nature of federal authority through the use of “clever” rhetorical questions, but the real star of the show was Kelly’s stony glare.

Kelly also got Bundy to disavow his brother’s assertion to The Oregonian that the group is “willing to kill and be killed if necessary,” sort of (emphasis mine):

Kelly: Your brother, Ryan, apparently told the “Oregonian,” that you are willing to kill and be killed, if necessary here. Do you agree with that?

Bundy: That statement was taken way out of context. I’ve already talked to my brother about that, and so no, i wouldn’t agree with it, because it wasn’t his statement.

Kelly: So you will not let this come to violence?

Bundy: Well, I have a family. I have six children, a beautiful wife. I have a wonderful home. I have a business, several employees. I’m not here to die. I’m here to defend my freedoms and my liberties, and will I? Yes. But it’s not going to come to that.

Even in context, that doesn’t sound so much like a walkback as it does overconfidence that the federal government will once again cave in. If they don’t, Bundy is still saying he will “defend” his freedoms, and he’s still holed up in federal property with a gang of armed men. Maybe the feds should send Megyn Kelly in after them.