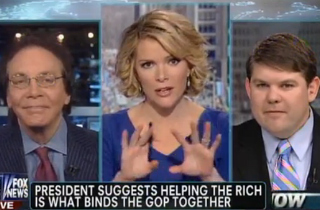 This afternoon, Megyn Kelly‘s political panel took on President Obama‘s Thursday comments to Al Sharpton that concerns about protecting the wealthiest American is what unites the Republican Party.

“Nothing is important enough to raise taxes on wealthy individuals or corporations,” Obama told Sharpton of the GOP’s motivations. He said that world-view “binds” the party together.

Conservative radio host Ben Ferguson suggested the president “Look at Nancy Pelosi, she didn’t want to get a pay cut. In fact, she wanted a pay increase, even talking about lowering her salary right now is beneath the dignity of her job. So you tell me who actually is a rich person looking out for rich people. Republicans are looking out for average Americans.”

Kelly asked liberal commentator Colmes whether Obama’s comments risk alienating the 42-percent of Americans who identify as Republicans by suggesting they don’t care about anything but protecting wealthy Americans.

“I loved how you act as if the Republican Party being united on cutting government spending, where we’re borrowing about 50 cents of every dollar right now that we’re spending in this budget, is somehow a bad or unfair thing,” Ferguson shot back.

Colmes clarified that he meant that the “only ideas” the GOP has are “cut taxes and cut spending.”

Kelly then asked Ferguson whether Obama has broken his pre-election promises to not “demonize” his opponents by painting the Republicans as “only caring about this one thing and it’s about protecting the rich.”

“When he talks to Al Sharpton and Jesse Jackson, he continues to use this blanket statement that all these rich people are against you and I’m the guy in favor of you,” Ferguson said. “And he was speaking to that audience, which I’m not sure that the president actually believes that, to be honest with you. I think he knows that’s how he sells this to the Al Sharpton/Jesse Jackson world and every Republican is evil, rich and white and I’m fighting them, so be on my team.”