Melissa Harris-Perry to Speaker Boehner: Don’t Let Yourself ‘Get Bullied’ on Immigration 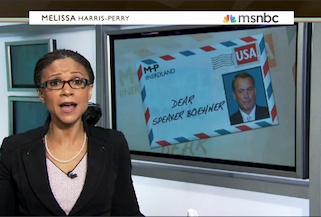 This week, House Speaker John Boehner (R-OH), who once seemed eager to get immigration reform accomplished this year, indicated the chances of a law passing through Congress was starting to look more and more unlikely. Not because he and his fellow Republicans don’t want it to happen, but because “there’s widespread doubt about whether this administration can be trusted to enforce our laws and it’s going to be difficult to move any immigration legislation until that changes.”

In her open letter segment Saturday, MSNBC’s Melissa Harris-Perry addressed Boehner directly, imploring him to reconsider his stance and stand up to the “bullies” in his own party who she believes are scaring him away from action on the immigration issue.

“You told the country this week that immigration reform is unlikely to happen this year because of the president?” Harris-Perry began. “But I gotta say, it looks like you are the one standing in the way.” She went on to list the various statistics showing that Americans support immigration reform, including 72% of people in Boehner’s home state of Ohio.

She suggested that Boehner cares less about the fate of America’s 11 million undocumented immigrants and more about his own speakership, especially when he’s being threatened by his fellow GOP members. “Oh, Mr. Speaker!” she exclaimed. “Are you getting bullied by that itinerant conservative caucus –- again! It might be worth remembering that, while Republicans in the House elected you speaker, it’s the people who elected you to Congress in the first place.”