Michael Eric Dyson: Charter Schools an ‘Attack on the Civil Rights of All Children’ 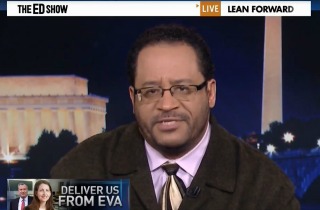 New York City Mayor Bill de Blasio is defending his administration’s decision to close a series of private schools on the basis that they syphon resources away from public schools which serve more of the city’s underprivileged students. Charter school advocates claim that private schools perform better than public schools and some have even asserted that limiting access to private schools violates students’ civil rights.

On Monday, Georgetown University Professor and MSNBC contributor Michael Eric Dyson joined MSNBC host Ed Schultz where he dismissed the notion that Success Academy Charter Schools founder Eva Moskowitz had grounds to file a civil rights case against New York City. He added that the existence of charter schools could be construed as a violation of the civil rights of all children.

“The opprobrious use of civil rights language to try to justify an attack on the civil rights of all children, for that matter,” Dyson said when asked about Moskowitz’s charges against the de Blasio administration. “What’s at stake here is the equal education and equal access to education of all children.

“Charter schools, in one sense, create two tiers,” he continued. “It reinforces the syphoning off of critical resources from public education students to those in charter schools.”

“Let’s redistribute the goods so everybody has equal access to education,” Dyson concluded. “I think that’s what Mayor de Blasio is about here.”

“How can you say that kids with special needs don’t deserve the proper attention?” Schultz asked.

“This is fundamentally uncivil and against ever tenet of the Civil Rights Movement that we can think of,” Dyson agreed.