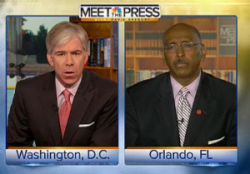 RNC chair Michael Steele has been, unlike some members of his party, a supporter (albeit a tepid one) of Christine O’Donnell. This morning on Meet the Press David Gregory asked Steele about all the questionable attention some Tea Party candidates have been generating with some of their more flammable and/or mockable remarks.

Gregory: There’s been a lot of attention towards some of the Tea Party-backed candidates: Sharron Angle, speaking to Latinos in Nevada, or Ken Buck’s statement about gays on this program last week, or Christine O’Donnell, who has gotten so much attention, except for the fact that she’s so far behind in that senate race. She’s had misstatements or gaffes in her statements with Chris Coons.

Steele: Folks make mistakes. Lord knows. I’m familiar with foot in mouth disease. I understand how that is sometimes. You get in the heat of the battle and you have the passion and fire in your belly and you really want to get out there and speak to the issues, speak to the people. you say things that don’t come out correctly. You create misperceptions. That happens a lot in campaigns on both sides. What really matters is how the voters receive that, how voters look at those candidates. Despite those flaws, if you will, of the misspoken word, people understand where their heart is. People understand these folks are going to go out there and fight for them. As I said a little bit earlier, David, this reality right now for people is that we want a leadership that’s going to listen to us. we want someone that’s going to take the fight to congress and not fight against us. whether it’s Christine O’Donnell, Sharron Angle, whoever it happens to be, who has this ground swell of energy behind them, that’s what matters to the people right now.

The “reality” of this is also that O’Donnell is 11 points behind in the polls and Jerry Brown has doubled his lead over Whitman. Harry Reid, meanwhile, is reportedly already preparing for a possible recount with Sharron Angle. Watch below.