Michael Steele Sums Up Obama’s Contraception Policy As ‘I Got Your Back, Here, Have A Pill’
video

Michael Steele Sums Up Obama’s Contraception Policy As ‘I Got Your Back, Here, Have A Pill’ 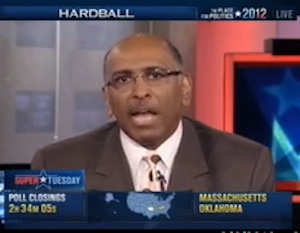 Appearing on Hardball, former RNC chief Michael Steele and Salon editor Joan Walsh argued over President Obama’s contraception mandate with Chris Matthews interjecting that “I think we’re all in this together, it’s not a female issue. it’s a human issue!”

“This is the problem I have with the description laid out there,” Steele rebutted. “What’s the problem? You have effectively absolved the male of any responsibility in the relationship with this woman, whether it’s a sexual nature or beyond that. And I think that that’s something that is fundamental to this argument, this discussion. It’s not just about giving women access to contraception. It’s about the responsible behavior that goes with that access.”

Walsh took umbrage at Steele’s analysis, but he trudged on.

“Let me finish my point! It’s nice for Barack Obama to tell women, ‘I got your back. here, have a pill.’ But it’s also equally important…”

“That’s what you just described!” Steele fired back.

“They have a responsibility here that’s not just about Viagra,” Steele continued. “It’s about when you come together in that fashion, there’s a responsibility that kicks in that you just don’t want to be absolved because the woman has a pill.”

“That’s not what Joan said!” Matthews incredulously replied. “She said it’s just a general concern about child bearing that we all share together!”

“I agree with that,” Steele added. “But I’m saying it’s also this other piece that doesn’t get talked about in terms of the responsibility of fathers, or potential fathers, in this relationship. ”