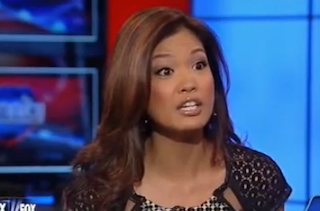 On his show Wednesday night, Sean Hannity asked Fox contributor Michelle Malkin about an anti-gun rally in which slain Boston Marathon bomber Tamerlan Tsarnaev’s name was read as a victim of gun violence.

The rally was held by Mayors Against Illegal Guns, New York Mayor Michael Bloomberg’s heavily-funded pro-gun control organization, which apologized for the inclusion of Tsarnaev’s name.

Neither Hannity nor Malkin believed them. “Why do I, in my gut, think this was not a mistake?” Hannity asked.

“I think it’s a good instinct,” Malkin said. “The Mayors Against Illegal Guns is a far-left radical group and it’s not out of the question to think that many of these members actually have genuine sympathies for the likes of Tamerlan Tsarnaev.”

“Let me point out this group has a 501(c) arm to it,” Malkin continued, “a social welfare organization that had special IRS tax treatment. Never any scrutiny of the kinds of things they’ve been doing, the lies they spew, the smears they have leveled against law-abiding gun owners. And he’s spending billions. If this was a right-wing group we would hear all about it, and sunshine, and what about the donors and darkness and where is the transparency?”

“This is enforcement kabuki by desperate Democrats and Republicans who have been willing tools for the open borders lobby,” Malkin said. “With every amnesty that’s been passed by Congress, there’s one result from it: more illegal immigration. As Ted Cruz put it, words do not secure borders.”

Hannity asked if Malkin would be more amenable to immigration reform if it came with a trigger based on border security.

“I reject the premise of secure the border first,” Malkin replied. “I hate these platitudes. It’s secure the border period. Because the Constitution says, article IV section IV—nobody talks about the Constitution any more when we talk about illegal immigration—that it is the duty of the federal government not only to provide for the common defense but to secure the states against invasion. And they failed and failed to do that job.”

“This current administration has done everything in its power to sabotage immigration law,” Malkin continued. “Why would you trust them one iota with the job that they refuse to do?”

Watch the exchange below, via Fox News: