Moment of Zinn: “Democracy Is In Dissent”

Moment of Zinn: “Democracy Is In Dissent” 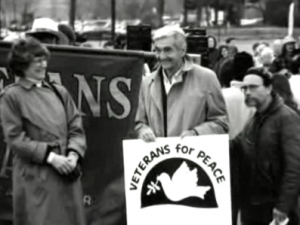 I spent some time tonight getting caught up on Howard Zinn, historian, author and activist who died yesterday, and whose death triggered a similar, if quieter, sort of outpouring as did the death of another American icon, J.D. Salinger. Zinn’s popularity came from his taking of an unpopular and rather uncompromising line of reasoning that ran counter to the rah-rah themes of ‘accepted’ American history, aka that which had been written by the victors:

Proudly, unabashedly radical, with a mop of white hair and bushy eyebrows and an impish smile, Mr. Zinn, who retired from the history faculty at Boston University two decades ago, delighted in debating ideological foes… A conventional historical account held no allure; he concentrated on what he saw as the genocidal depredations of Christopher Columbus, the blood lust of Theodore Roosevelt and the racial failings of Abraham Lincoln. He also shined an insistent light on the revolutionary struggles of impoverished farmers, feminists, laborers and resisters of slavery and war.

Or, as Zinn said: “If you look at history from the perspective of the slaughtered and mutilated, it’s a different story.”

Last night on the Daily Show, Jon Stewart closed with a ‘Moment of Zinn‘ from his interview with Zinn from January, 2005, in which Zinn reluctantly conceded that maybe modern times were less barbaric than they were 300 years ago – maybe. I took a look at the whole clip, and it is just as uncompromising as ever, as Zinn compares the Iraq War to Columbus’ conquest of America, including barbarous behavior on both sides. “Two hundred statements of defiance…the voices of not presidents, not generals, not industrialists — the voices of Indians who refused to be annihilated, black people who refused to be humiliated, women who refused to be put down, working people who go out on strike for the eight-hour day, soldiers who refused to fight in an immoral war – it’s those voices.” The full clip is below:

Zinn’s Voices of a People’s History of the United States begat a staged performance, with readings from the book performed by socially-conscious actors like Viggo Mortenson, Marisa Tomei, Danny Glover and Morgan Freeman as well as musicians like Bruce Springsteen, Bob Dylan, Eddie Vedder and John Legend. Pieces of it are online, but here’s the still-powerful trailer:

Trailer: “The People Speak” on the History Channel, Sept 2008

(I felt very conscious of being a Canadian watching all this, so specific to he American experience as it is. But then I saw Sandra Oh performing Emma Goldman and I felt better.)

And finally here’s Bill Moyers (of course Bill Moyers) hosting Zinn on his show to discuss The People Speak (with more clips from the performance – Viggo Mortensen‘s monologue at the beginning of part 3 is quite moving, and a little shocking in how difficult it is to pinpoint when in history it’s from, since it could have been very very recent). Zinn points a finger at the media: “They have not played their role in educating the public about what’s going on.”

“Democracy doesn’t come from the top it comes from the bottom…democracy is not what governments do, it’s what people do.” It’s interesting to be examining these ideas in the wake of SOTU, and also in the wake of the campaign finance decision. Dissent has marked this last year of Obama’s presidency, but it was part of what swept him into office. And going forward, how will dissent against newly-freed corporate campaign money be shown? Also dissent can exist on its own, but if anyone’s given it a boost over the past few years, it’s Moyers and Stewart. Just a few things to think of while thinking about Howard Zinn, and also a third thing that I’m thinking: Wow, what a patriot.