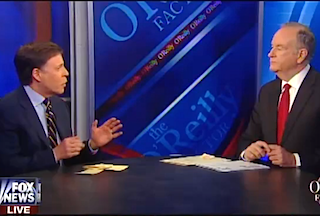 Monday night, Bill O’Reilly welcomed NBC Sports’ Bob Costas as his guest on The O’Reilly Factor and delivered some even stronger than usual ratings for Fox News. O’Reilly averaged 458K viewers in the 25-54 demo, beating CNN and MSNBC combined at 8pm.

In total viewers, O’Reilly had 3.057M, this time beating CNN, MSNBC and HLN combined by more than 1 million viewers. Fox’s The Five was the second-highest rated show overall with 2.179M, followed by Special Report with 2.098M.