Morning Joe Checkmates Spitzer: ‘Is There Anything People In Elective Office Can Do That’s Disqualifying?’
VIDEO

Morning Joe Checkmates Spitzer: ‘Is There Anything People In Elective Office Can Do That’s Disqualifying?’ 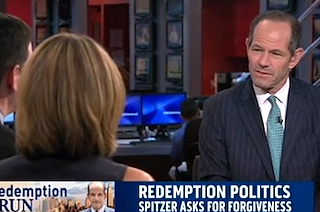 Former New York Governor Eliot Spitzer appeared on Morning Joe Tuesday morning to answer questions about his salacious past in light of his sudden entrance into the race for New York City comptroller. Spitzer offered the normal contrite phrases of a disgraced politician until Mark Halperin pinned him down over whether his potential election would signal that no behavior is outside the bounds of a New York politician.

“If you win, you will not really have paid—you’ve paid some price, obviously, but you will not have had your public career ended,” Halperin said. “Wouldn’t that to some extent reinforce the notion that you could do what you wanted to do?”

“I think there has been a substantial price to be paid,” Spitzer said. “I’ll let others determine small, adequate or inadequate. But resigning the governorship, and then dealing with the aftermath of that, and dealing with everything that has flowed from it, is pretty significant.”

“Are there any things people in elective office, a high office like governor of New York, could do, that involved law breaking, lying to the public, that you would consider as a voter disqualifying?” Halperin asked. “Or nothing’s disqualifying if a person comes back and says look at what I’ve done for the last five years, look at my great ideas?”

“If people lie about their taxes, not having paid their taxes and all the rest—” Spitzer said.

“But you lied about illegal activity,” Halperin said.

“I lied about personal sexual activity, yes. I did that. I’m not diminishing that.”

“You weren’t lying about a consensual affair, but illegal activity,” Halperin pressed.

At this point, Spitzer was checkmated. “That’s correct,” he said.

“You’re saying lying about illegal activity, to you, is not disqualifying?”

“I will let the public make the determination,” Spitzer said.