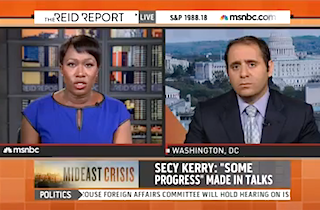 Palestinian journalist Rula Jebreal may no longer be an MSNBC contributor, but that doesn’t mean voices representing the Palestinian point-of-view are absent from the network. On Wednesday afternoon, MSNBC’s Joy Reid hosted Jerusalem Fund director Yousef Munayyer, who attacked the prevalent narrative that Hamas uses Palestinian civilians as “human shields” in its fight against Israel.

Responding to a spokesperson for the Israeli prime minister, Munayyer accused the Israelis of trying “blame the victims for their own deaths.” He added, “I think there’s something fundamentally wrong, and in fact racist about that argument.”

He called the issue of Hamas using “human shields” something that is repeated by Israelis over and over, but has not been corroborated by independent investigations. Munayyer pointed to a 2009 report from Amnesty International that found “no evidence that [Palestinian] rockets were launched from residential houses or buildings while civilians were in these buildings,” but did find Israel employing that practice using Palestinian civilians.

Munayyar said “it’s very easy, of course, for the Israelis to make up infographics and videos and whatever else to claim Palestinians, you know, just want to stand in front of Israeli missiles. But, I really don’t think that’s the case. I don’t think that, you know, independent reporting has proved that to be the case.”

When Reid pressed him to address reports that Hamas had located its weapons systems near hospitals and schools, Munayyar said the United Nations Human Rights Commission would need to assess that in the aftermath of the conflict. Also on Wednesday, United Nations’ human rights chief Navi Pillay suggested that both sides may be committing war crimes.

“The Israelis launched a military operation in the Gaza Strip that they knew would cause massive civilian death, and they also knew would not significantly change the military dynamic,” Munayyar told Reid. “That is the major crime in my view here.”