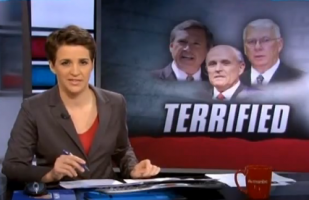 Last night, Chris Matthews, Keith Olbermann, and Rachel Maddow all took to the airwaves to criticize Republican lawmakers for their reluctance to see Khalid Sheikh Mohammed tried before a civilian court in New York.

The trial seems poised to become the media spectacle we predicted it would this past weekend — but why? Do the left-right battle lines along which this seems to be falling even make sense?

First up: Chris Matthews, who spoke to Illinois Representatives Judy Biggert (R) and Jan Schakowsky (D). When Biggert voiced her opposition to the trial, Matthews, who has apparently been rewatching HBO’s John Adams miniseries a lot lately, lectured her on American history: (at about the 2:30 mark)

Matthews: Back in the beginnings of our country, we had a trial for the soldiers involved in the Boston Massacre, and we gave those soldiers a real trial, and John Adams was their defense attorney. And a lot of them got off. Do you think that was a mistake to give them a real trial, or should we have just executed them. What should we have done?

Biggert: Well, I’m talking about having a real —

Matthews: Was it wrong to give a real trial to people who shot down our people in the Boston Massacre, or was that a good emblem of the kind of country we were going to be, a country of laws?

Matthews: John Adams was their defense lawyer. Should he have not taken that job? Not defended the enemies of our country, and shown that we have a good system of law in this country? Was that a mistake?

The difference between then and now, of course, is terrorism. There’s a big difference between trying soldiers who are members of a clearly defined opposing army that fights according to a set of accepted military rules and trying terrorists who are members of a murkily defined network that has no qualms about killing civilians in any way possible.

Next page: Olbermann’s and Maddow’s takes