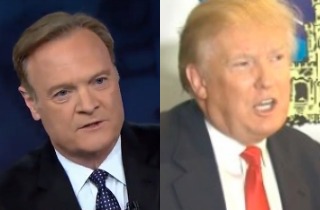 When it comes to broadcast networks taking issue with his controversial statements about Mexicans, Donald Trump‘s default response has been to threaten Univision and NBC with lawsuits. MSNBC’s Lawrence O’Donnell spoke tonight about NBC’s decision before getting to Trump’s reputation of threatening lawsuits that he does not actually pursue.

“Donald Trump threatening to sue people, which is what he does anytime you don’t actually compliment him,” O’Donnell said to Joy Reid. “What he does is he threatens to sue every day, several times a day, and once a year or so he sues somebody.”

O’Donnell also brought up his online feud with the 2016 hopeful back in 2011, showing a tweet Trump released saying he would sue him too:

I heard, because his show is unwatchable, that @Lawrence has made many false statements last night about me. Maybe I should sue him?

Reid also got in on the conversation, saying “the two-part Donald Trump dance is ‘no no, they didn’t dump me, I dumped them’… I think what we have discovered is that Donald Trump is very good at playing ‘Donald Trump’ this character he created however many decades ago.”

If Trump was to decide against proceeding with his lawsuits, this would not be the first time. In 2013, Trump threatened to sue Bill Maher when he answered to a bet Maher jokingly made for him to release his birth certificate and prove that he was not actually the son of an orangutan. He never actually followed through.