Nancy Grace On Casey Anthony: ‘Somewhere Along The Way There’ll Be Another Crime’ 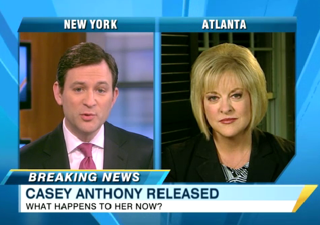 The image of a liberated Casey Anthony leaving the prison that has for years housed her must have been extremely jarring for those that followed the case closely and had no doubt of her guilt. Needless to say, it was difficult to watch for Nancy Grace. Grace appeared on Good Morning America today to react to the midnight release, and aside from questions as to who is funding Anthony’s getaway, she noted weighing heavily on her was a “disappointment in our justice system.”

Grace told host Dan Harris that she was “still stunned” by the fact that Anthony had been released, and felt a “disbelief and a disappointment in our justice system” that she expected to share with those who thought similarly to her. That’s not to say that Grace had lost the faith in America– “while we all love it,” she clarified, “it hurts and it’s disappointing to see a miscarriage of justice.” Of critics who argue that Grace’s continued coverage of the case is occurring way beyond its welcome time, Grace ceded they were entirely correct. “It was due process; she was acquitted,” she said, adding that “the public will now be the judge if Casey makes money off of Caylee’s murder.”

Harris then asked whether she was concerned that she had incited violence against Anthony by “some people in your camp,” which brought out Grace’s indignation. “First of all,” she air-quoted, “I don’t have a ‘camp,'” but that it was her and “thousands of people that agree” who are “in the camp of justice.” That said, she said she believed “anyone who believes in justice does not believe in vigilantism,” and she expected “no private action against Tot Mom.” She then mused a bit as to where she had gone and who was paying for it, noting that Anthony’s private flight cost “a pretty penny.”

Grace concluded her segment confirming that she believes Anthony will get in trouble with the law yet again. “You are what you are,” she noted, arguing that counseling is often futile and Anthony had participated in so much immoral behavior that “I believe somewhere along the way there will be another crime.”

The segment via ABC News below: