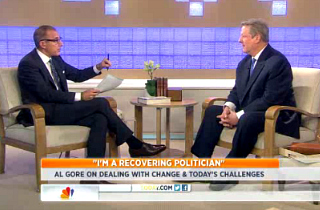 This morning on the Today Show, NBC’s Matt Lauer grilled former Vice President Al Gore over the “contradictions” in his sale of Current TV to the largely oil-funded Al Jazeera network.

“Was [buying Current] always just an investment to you?” Lauer asked after reading off the amount of money Gore made from his stake in the network. “Maybe I was naive, I thought it was something you had an ideological interest in, so why did it become just an investment at the end?”

“No, it didn’t,” Gore responded. “As an independent network — the only independent news and information network — we found it difficult to compete in this age of conglomerates and i’m pleased that Al Jazeera has established itself as a respected news-gathering network.”

Lauer then confronted the former VP with his own seemingly contradictory remarks. “Even as you sold to Al Jazeera, you in the book blast other television news programs saying this,” reading Gore’s old comments:

“Virtually every news and political commentary program on television is sponsored in part by oil, coal and gas companies — not just during campaign seasons, but all the time, year in and year out — with messages designed to soothe and reassure the audience that everything is fine, the global environment is not threatened.”

“And the critics jumped. They said, ‘Here’s the guy who just sold Current TV to Al Jazeera, which gets an undetermined amount of funding from the country of Qatar, which gets its money from oil reserves,'” Lauer said.

“Isn’t there a contradiction in that?” he asked.

“I certainly understand that criticism,” replied Gore. “I disagree with it. I think Al Jazeera has, obviously, long since established itself as a really distinguished and effective news gathering organization. And by the way, its climate coverage has been far more extensive and high-quality.”

“But if they get funding from a country that bases its wealth on fossil fuels, and fossil fuels are the enemy you target in climate change, isn’t there a bit of hypocrisy in that?” pressed Lauer.

Gore doubled down, insisting that despite its oil-rich funding, Al Jazeera has maintained a reputation of independence: “This network has established itself. It’s objective. It’s won major awards in countries around the world and its climate coverage, as I said a moment ago, has been outstanding and extensive.”