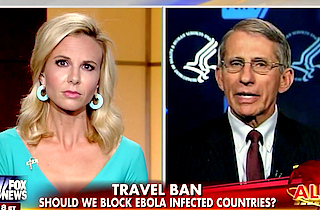 If there’s one question being asked more than any other about the ebola epidemic in west Africa, it’s why public health officials don’t just impose a travel ban to isolate the virus to the region. Director of National Institute of Allergy and Infectious Diseases Dr. Anthony Fauci explained this to Chris Wallace in wider interview on Sunday, but he returned to explore it in more detail on Fox & Friends Monday morning.

“From a public health standpoint, that really doesn’t make any sense,” Fauci said. “When you completely seal off and don’t let planes in or out of the west African countries involved, then you could paradoxically make things much worse, in the sense that you can’t get supplies in, you can’t get help in, you can’t get the kind of things in there that we need to contain the epidemic. …That marginalizes them. You could have civil unrest, governments could fall, and then you wind up having spread the virus to other countries in west Africa, which would only compound the problem.”

Hasselbeck asked if shutting down commercial air travel while allowing medical supplies and evacuations would do the trick. Fauci replied that west Africa was not simply impoverished areas affected by ebola, but functioning states with Americans, business travelers, people with dual citizenships, and so on.

“It’s completely impractical and in fact from a public health standpoint, not helpful to do that,” Fauci said. “Every public health official feels that way.”