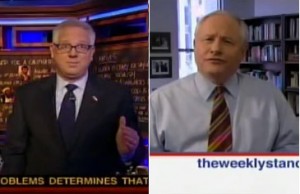 Glenn Beck no longer seems to be quoting Davy Crockett and leaving for Texas while his critics criticize. The massive amounts of heat he’s taken in the past week from both the Left and the Right have clearly taken their toll so, today, he told his audience he’d be delaying his planned material to respond. This primarily resulted in an episode of the host citing his sources as he went one by one through the statements he made in his Egypt shows and gave his evidence. It also resulted in one of the most awkwardly hilarious moments ever as he bad mouthed one of his Conservative critics, The Weekly Standards’ Bill Kristol, before cutting to a commercial…for The Weekly Standard…starring Bill Kristol.

Their feud started when Kristol wrote a piece in the Standard accusing Beck of hysteria. Beck hit back on his radio show. Then, this morning on Morning Joe, Kristol was asked about the situation and declined to speak about it, joking that he’d prefer to debate Beck on Fox News. I suppose this is one way to go about that.

The moment in question came as Beck was defending his Muslim caliphate claims by pointing to a 2004 CIA report that addressed similar concerns as well as a website brought to his attention by a viewer in Colorado. As he discussed it, he wrapped up by pointing at pictures of Kristol and a couple other critics.

“I’m never going to actually expect these guys to do their homework. They’re not. They’re comfortable in their jobs, they’re with their titles, and that’s just the way it’s going to be. They’ve had their time in the sun. But, Chris in Broomfield, Colorado did his homework. And it makes all the difference in the world. Back in just a second.”

As Groucho Marx would say, “I’ve heard of Glenn Beck having problems with advertisers, but this is ridiculous!”