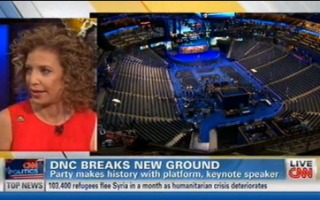 DNC chairwoman Debbie Wasserman Schultz stopped by Starting Point in Charlotte Tuesday morning to discuss what this year’s Democratic National Convention has in store, focusing on it having a more “positive” tone than that of the Republican convention.

“Over the course of the week, you’ll hear a very different tone than the one that you heard last week in Tampa,” she said, “which was really essentially one nonstop series of attacks on President Obama. We’re going to layout the case for moving the economy forward. President Obama and speakers throughout the week will talk about and have an honest conversation about where we were when he first took office and where we are now after four years of his policies and 29 straight months of job growth in the private sector, and that we need to continue to move forward and we’ve got a ways to go but that we’re moving in the right direction and need to focus on rebuilding our economy from the middle class out and bottom up and not go back to the failed policies of the past.”

“i don’t think Mitt Romney in his speech attacked the President,” countered host Soledad O’Brien. “I thought his tone was very much of a ‘he’s an extremely nice man, we need to find another option.'”

“I’m not sure there was a single positive thing that was said about what the Republicans had to offer,” said Wasserman Schultz, later adding, “spare me if i don’t really trust that Romney has been rooting for Obama to succeed.”

O’Brien then noted that VP nominee Paul Ryan has “liked to invoke the name Jimmy Carter,” specifically joking that the current climate makes Carter’s administration look like “the good old days.” Vice President Joe Biden, meanwhile, has countered that rhetoric by noting that, under Obama, “Bin Laden is dead” and “GM is alive.”