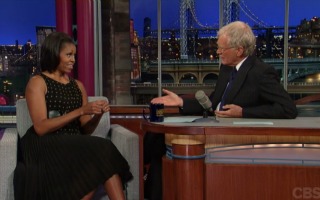 RELATED: Michelle Obama Welcomes Paul Ryan And His Family To The Campaign: ‘This Is A Privilege’

One challenge, she said, is helping employers understand how to interpret a military resume. When Letterman noted that some might be hesitant to hire a veteran for fear that he or she might be suffering from PTSD, the First Lady tried to debunk some myths about the condition:

Letterman also asked Obama about her initiatives to help children eat healthier school lunches and the “Kids’ State Dinner” she recently hosted, where children had the opportunity to submit their own healthy recipe ideas. Letterman shared that he’d been less than enthusiastic about the idea of eating kale chips, but admitted they’re pretty good. [Wasabi seaweed chips are better though. IMHO.]

Have a look, courtesy of CBS:

Later, when asked about how the weather had impacted the Republican National Convention, the First Lady admitted that she “tends not to watch” them, but encouraged voters to keep an eye on both the RNC and DNC to help them make their decision. Letterman took the opportunity to talk up Rachel Maddow — once again noting that the MSNBC host is the smartest person he knows. He also segued into talking about Todd Akin, asking whether the reaction to comments such as his ever make her husband go “heehee:”