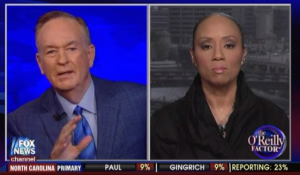 As promised, Bill O’Reilly has stuck with the story about the assault of the Virginian-Pilot reporters, following up on the case Tuesday night. Joining him to discuss it was Fox News analyst Santita Jackson. Deciphering the case, the two clashed while trying to understand what determines the media coverage of such cases.

The media, O’Reilly said, fears controversy involving African-Americans. Jackson said we have to dissect the racial tensions so we can correct them. The media in and of itself or other people, she said, are not afraid of black people.

O’Reilly said there’s got to be a reason media outlets are ignoring the story, asking, “What is the reason?” Jackson replied, “Perhaps not. […] The fact is that I don’t think we do not pay enough attention to violence in this country, we tend to get more excited about interracial violence.” O’Reilly countered that Jackson wasn’t being specific to the Norfolk case, and pressed for a reason why this specific case hasn’t been reported more.

“I think you might be on to something there,” Jackson said. “But the wounds have not healed.” They won’t heal without a conversation, she said, adding, “We have become verbally violent, Bill.” O’Reilly said we need more than a conversation, but Jackson argued that we’ve never really had a conversation.

She went on: “But the thing is, Bill, what we do is we get very excited when we have these particular events, but then the conversation ceases. We have not had a real conversation, not just about race in this country but about violence.” O’Reilly asked Jackson why her father isn’t in Norfolk. “Do you know how much that would go to heal if they would do that?” he asked. “But we don’t see them there, Santita, they are not there.”

“I can’t believe that you’re actually saying that Rev. Jackson can have a healing role in America,” she replied. Amid they’re back-and-forth, Jackson said, “But Bill, you and I are in agreement.”

She later added, “It took more than six weeks for us to find out about Trayvon Martin. These things take time.”

O’Reilly conceded to her point about healing wounds, but added, “Cover-ups are not going to heal the wounds.”