O’Reilly Slams Anti-Limbaugh Radio Campaign: ‘There’s Something Very Fascist About All This’
Video

O’Reilly Slams Anti-Limbaugh Radio Campaign: ‘There’s Something Very Fascist About All This’ 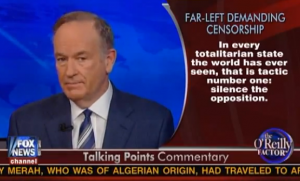 The left wing is demanding censorship, O’Reilly argued, and this radio campaign proves “beyond any doubt that Media Matters has no integrity whatsoever.” He agreed with the statement from Rush Limbaugh’s spokesperson, which said the “Media Matters mobs bear a simple message: renounce our enemies or become one of them.”

O’Reilly continued: “There’s something very fascist about all this, to shut down your opposition and not let them speak. In every totalitarian state the world has ever seen, that is tactic number one: silence the opposition.” To try to punish radio stations because of a mistake that’s already been acknowledged by everyone, he said, is “un-American.”

Later, Laura Ingraham touted the same message, saying we’ve seen “this pattern” on the left “for quite some time.” Those on the other side of the political spectrum, she said, only want free speech “when it suits their political aims.” It makes them look “really weak,” she added. “Media Matters should start winning the substantive debate.”

But they can’t win the debate, O’Reilly said. Ingraham said that’s because “they’re on the wrong side.”