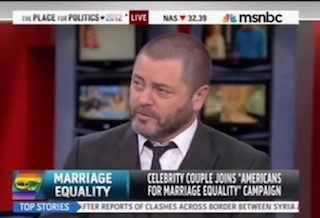 The NBC sitcom Parks and Recreation, a series which, in following the current NBC model, is better than anything on other networks but still watched by no one because it’s on NBC, is currently wrapping up a hiatus. However, Ron Swanson himself, Nick Offerman popped up on TV anyway today, lending his unmistakable voice to the fight for marriage equality. Recently, he and his wife Megan Mullally have taken time off from presumably working to create some kind of comedic super-baby (as well as acting and stuff) and filmed a PSA for the Human Rights Campaign. Offerman discussed it over on MSNBC (synergy!).

Offerman explained that he and Mullally had gotten involved because, by being in the entertainment industry, so many of their friends and loved ones are directly affected. Anchor Thomas Roberts brought up that public consensus was clearly shifting in favor of marriage equality but asked Offerman what he would say to legislators that actually make the decisions.

“I don’t know. I have a hard time not getting emotional about it. My message would probably be a firm slap to the cheek. But, if I had to be more temperate about it, I’d probably say that it just makes common sense. Those marriages are part of the team. These people just want to be a lovely family. And it’s not just the marriages that we need to focus on. These people have children and those children are also being denied rights that are being afforded ‘normal’ marriages.”

It’s a good point about public consensus. This is the American public who’d rather watch reality shows about ice truckers turning sweet 16 and having singing contests rather than Parks and Rec. If even the majority of them can see what needs to be done…

Watch the couple’s original video as well as the clip from MSNBC below: