Peter Schiff Releases Daily Show Email, Accuses Them of ‘Lying’ to Him

Peter Schiff Releases Daily Show Email, Accuses Them of ‘Lying’ to Him 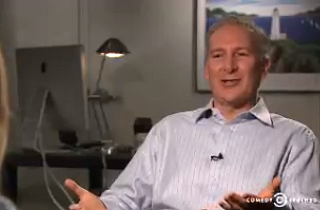 The financial commentator who was the focus of a recent Daily Show piece on minimum wage laws has released an email from the show’s staff in the process of accusing them of lying and editing his words out of context to make him seem villainous.

Euro Pacific CEO Peter Schiff was interviewed by Samantha Bee as the voice in opposition to minimum wage hikes. The segment made headlines when Schiff responded to a question about “who would be willing to work for $2 per hour” with the answer: “The mentally retarded.”

Suffice it to say, the final cut of the interview did not reflect well upon the businessman. Following the segment’s airing and subsequent viewer outrage, Schiff took to his website to blast The Daily Show for whittling down his 4-hour interview into the offending soundbite:

My use of the words “mentally retarded” (when Samantha Bee asked me who might be willing to work for $2 per hour – a figure she suggested) has come to define the entire interview. Although I had no intention of offending anyone, I just couldn’t remember the politically correct term currently in use (it is “intellectually disabled”). Assuming she knew it, Bee could have prompted me with the correct term, but she chose not to. By including those comments in the final package, “The Daily Show” proved that they did not care who they offended, as long as they could make me look bad in the process. The volume of hate mail I have received in the show’s aftermath confirms their success on that front.

He gave a fuller picture of how he initially answered the actual $2/hr. question:

When asked the $2 per hour question, I responded that very few individuals would take a job at that pay, even if it were legal. In a free market, businesses compete for customers by keeping prices down, and for labor by keeping wages up. Any employer offering even low-skilled workers just $2 per hour would be outbid by others offering to pay more.

However I did suggest two groups of people who might be willing to work for $2 per hour. The first group — which was edited out — was the unpaid interns who tend to value work experience and connections more than pay. (In fact, “The Daily Show” staffer who booked me, and who was present during the interview, had been thrilled to start there as an unpaid intern). Since many interns work for free, $2 per hour would be an improvement. Some interns are even willing to pay to work.

And Schiff asserted that the show purposely left out the broader context of his argument:

Some of Schiff’s fans found it baffling that he’d have ever accepted the invite knowing the show’s penchant for mocking its interview subjects. On Monday afternoon, he responded to those concerns by releasing an email showing a Daily Show staffer assuring him they show would treat him fairly:

We NEVER edit out of context. Meaning we never ever show responses to a question we never asked. For starters it LOOKS BAD! But in all seriousness it’s not our prerogative to attack our interview subjects & slander them (unless they say really horrible, awful, racist things… but last I checked Peter doesn’t say such things!).

The general idea is to pretend this is a real news interview & correct our correspondent when he/she asks goofy questions. Our questions usually come from misunderstanding the other side’s arguments, for example. We want our interview subject to play the straight guy & that way they look normal & we look like the fool.

In this case Samantha Bee is our correspondent. She’ll take things she heard at these fast food strikes & report them back to Peter. Peter tells Sam why she may be mistaken, or what the strikers aren’t taking into account, etc. That’s the general idea. And we’ll go over all of this before we start up the cameras next week. (Peter & Jena can also discuss these concerns over the phone tomorrow.)

But rest assured– NOTHING will be edited out of context.

If you guys have any other questions or concerns don’t hesitate to bring them up!

Watch the original segment below, via Comedy Central: